This week I’ve been trying to catch up with some mates.

Mostly because that’s a good way to occupy your evenings, and also because I recently read an article in Vice stating that all our social events are birthday drinks now, which I started to obnoxiously disagree with in the way I obnoxiously disagree with most things before realising that my counter argument was essentially ‘no! social events are also housewarmings, baby showers, engagement parties and Christmas!’ (on which note: firstly, it’s October, and secondly, I’ve made my thoughts about planning ahead very clear).

It’s not that the concept of the mid-week accidental boozy dinner ever really went away. But they’re more important than ever in this shiny new 30-something world where midweek evenings are all about scrolling through your phone, and weekends are the domain of Events (with a capital “e”), where ‘catching up’ is reduced to 10 minutes of rushed speed-dating style Q&As conducted while following the host into kitchens, gardens, toilets, or towards front doors; batting away other guests trying to say goodbye, and trying to find out what they’ve been up to in the two months since you saw them last.

So midweek dinners, then: dinners are the one. A few hours on a Wednesday night to sit down with one or two mates and have conversations that don’t begin with ‘so, what are you doing with yourself these days then?’ or ‘what is it you do again?’. Somewhere nice, but not too spendy. Nothing you’ve got to queue or book ten years ahead for. Just somewhere you can rock up after work, where the food’s decent, a bottle of wine isn’t £30, and the service is included but you don’t really mind because you’re pretty sure the waiter just gave you a cheeky smile. Bobs your uncle, Fanny’s your aunt, everyone’s in bed by 11:30pm.

But the eternal question: where? 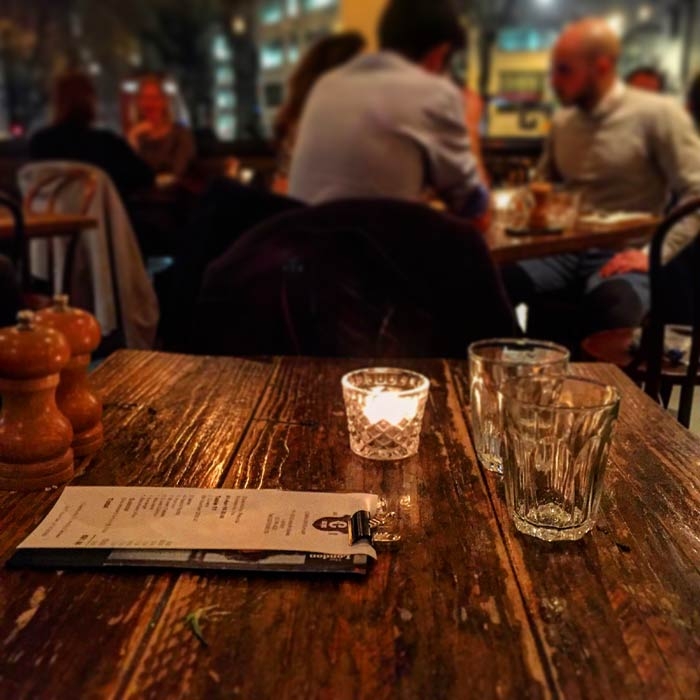 You’re pretty much good to eat anywhere on Exmouth Market – but shout out to Caravan in particular because the burrata is delicious, and they’ll almost always find you a seat if there’s just a couple of you if you just walk in on the night. It’s also a bit less shouty than the Kings Cross branch. And there’s Aesop hand cream in the loos, if that swings it for you.

I took not one, but two vegans here for dinner on a Thursday night after an extended happy hour, after which neither were either sober nor, indeed, strictly vegan. One of them did, however, declare this place the best fucking tapas I’ve ever had – and the other one has been here so many times on various dates before that she doesn’t even need to look at the menu any more. It’s great. Low lit little booths, sharing plates, and G&Ts as big as your head. On. The. Strand.

Love a bit of ceviche, but this Peruvian picky plates malarkey isn’t really the one for big groups because the dishes are small and I don’t like to share at the best of times, let alone when that food is a sliver of pickled fish. But for a couple of you, it’s delicious, and filling, and at Old Street they’ll probably be more likely to seat your mate who’s joining later because she had to work late than the Soho branch, where you’ll probably have to queue. So Pisco sours for two – actually, make that three – pretty please.

Oh good god, the food in this place. You might have to angle around a bit for a table if there’s more than 3 of you, but it’s a pub, so you can always kill time outside or at the bar. This is a good place if you don’t want interruptions – order at the bar from whatever’s on the blackboard (it’s above the chefs) that day. The pasta is banging, but lots of people also rate the fish and massive steak sandwich. It’s good value, delicious, and because it’s a pub, you can hang around for as long as you like after you’ve eaten.

I’m not sure if there’s anyone in London who doesn’t know about Le Mercury – aka, the place you go when you want to look like you’re spending more on French food than you actually are. Expect three courses of bistro can’t-go-wrong type food all for a set price, wine by the bottle or – my personal fave – carafe, we are en Francais now, mes amie! and have yourself a lovely night.

After Leather Lane’s food market shuts down for the day, Kin’s just there with its Asian Street Food, chilling, waiting. It’s pretty small in there, but the pad thai. is excellent and if you book in advance and they’ll give you 20% off your food bill mid week if you go straight after work, like before 6.30pm.

The best thing about Gallipoli is 1) the mezze and 2) that there’s about 80 (alright, three) branches along Upper Street, so if one’s busy, you can just keep trotting up the road until you find a branch with some spare tables. Stuff your face with hummus and stay there as long as you want.

I’m pretty sure there’s a sentence in the Magna Carta divining that if anyone goes to Burger & Lobster and orders the burger they’re an idiot, but that said, there’s nothing I love more than the illusion of choice. So, know that you should always order the lobster, which, like the burger, is £20 at every branch except the Bank one, where they inexplicably charge a lot more because no one’s paying for their own meal anyway. And don’t be fooled by Instagram, the obligatory photo of you and your mate wearing a bib is entirely optional.

‘That will never fill me up. Look at those tiny dishes! Look! Mere morsels!’

Mexican tapas is a bit of a minefield in London – and I’m not saying you’d make a proper beeline for this place from south London, but if you find yourself in Dalston in need of good cocktails, very good picky-bits, and chorizo in red wine that genuinely melts when you eat it, this is the place.

Let’s be real, you’re not going to go to Clutch with someone you don’t know that well because no one wants to negotiate a basket of sticky chicken wings in front of someone they potentially want to shag. It’s in the backstreets of Hackney, but to be quite honest with you, I’d go to Mongolia for a taste of those sweet sweet parmasan and lemon chicken tenders. Hold me.

I went here for the first time this week, and it was nicely buzzy, with very decent wine and also those good, thin pizzas that mean you definitely need to order one each. There’s also a lot of seating for a pub, including a row of stools and a ledge opposite the bar where you can quite happily sit, yap away, and demolish a couple of pizzas.

Let me know where you go for a not-too-spendy-feed on a casual Tuesday. Especially if you go to west or south London, where I clearly don’t go very often.

Want more of this kind of stuff? There’s a newsletter for that.