As we established a few months ago, advance planning isn’t really my thing.

But there are limits to this rule, and perhaps deciding to go to a music festival in another country a week before it happens is one of them.

It’s a good idea right up until you realise airlines are complete bastards and will happily charge you triple the amount you’d normally spend on flights, and that most of the decent places to stay are already booked.

Which is why we spent a lot of time researching our options and carefully weighing up the pros and cons. 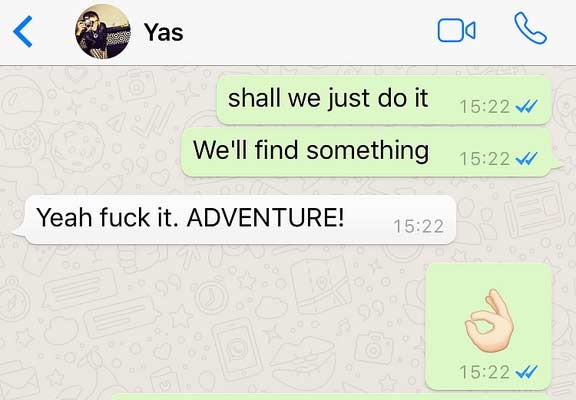 But at least we weren’t paying for the tickets.

Work had given me a couple of VIP passes for free, plus £200 towards getting there, which sounds well good until you consider it was 7 days until the festival and flights were £200… each.

But luckily Ryanair took this extortionate fare hike into consideration by delaying our flight for an hour and a half, giving us ample time to mainline Prosecco in Stansted Airport Wetherspoons and allowing us to really get into the festival mood before we arrived.

And anyway, sod it, we were off to Berlin. A city where Even if it’s 1am by the time you land and the next train isn’t for another hour, forcing you to spend what you’re fairly sure is an entirely made up taxi fare getting to your Airbnb so the host can go to sleep, the bars will still be open by the time you’ve dumped your bags, said hello and met the cat.

On which note, meet our host, aka the world’s most perfect cat: 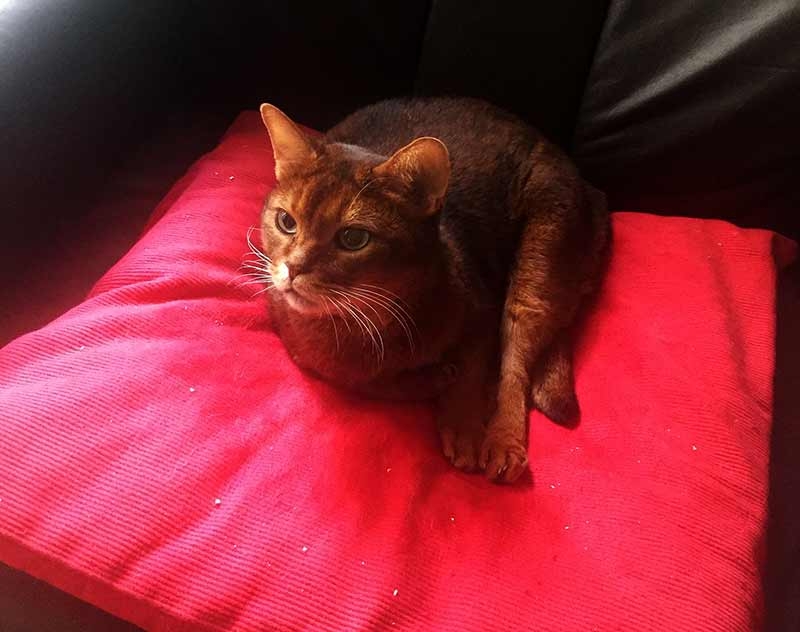 The next afternoon we woke up early, ready for the day ahead.

We woke up at some point on Saturday afternoon feeling like death because we stayed out til 5am, and it was also raining, and a bit chilly.

So after a slow start and a lunch that saved me from eating my own hand, we went to Ostkreuz bahnhof to make the half hour S-bahn journey out to Hoppegarten, the racecourse-turned-festival site to the east of Berlin. 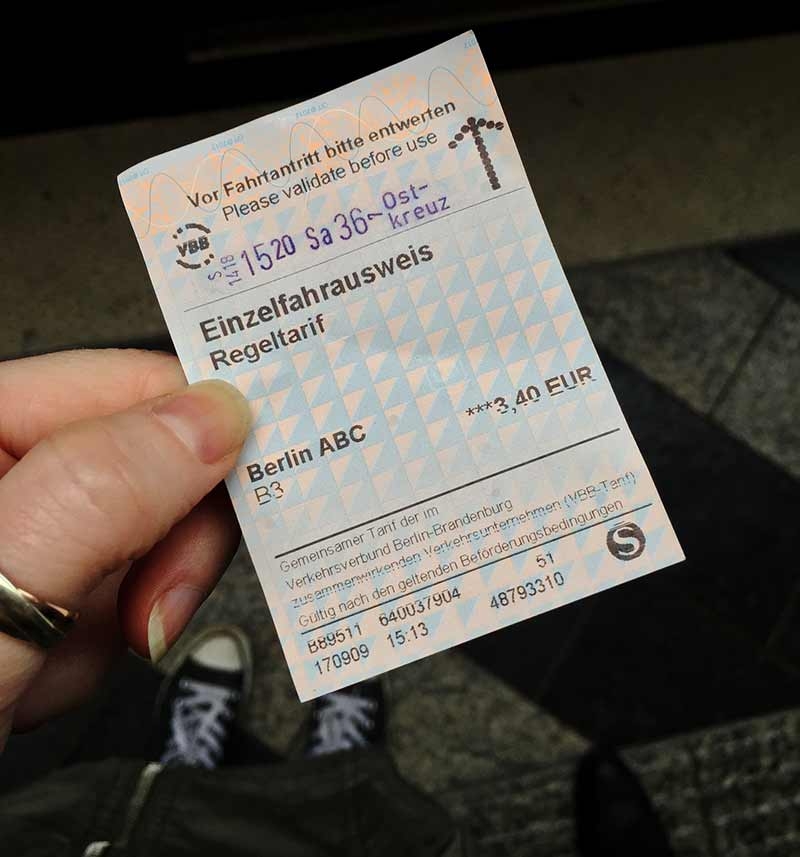 When we arrived, there were a couple of things I noticed straight away.

The first thing was that Germans take instructions very seriously.

And by this I mean there were frankly admirable levels of dedication shown to one particular item they’d listed on the website:

Because let me tell you, when you haven’t seen a drawstring sack bag since the Nike ones were big in 1998, it’s really quite something to suddenly see several thousand in one weekend.

I mean, there were a lot of drawstring bags.

So many that I would frequently just stop and look around me and say “I can’t believe it, look!”: because where, apart from JD Sports, GAP or the Apple Store, do you even get a drawstring bag in the year of our lord 2017?

Ask the people of Lollapalooza, because trust me. They know. 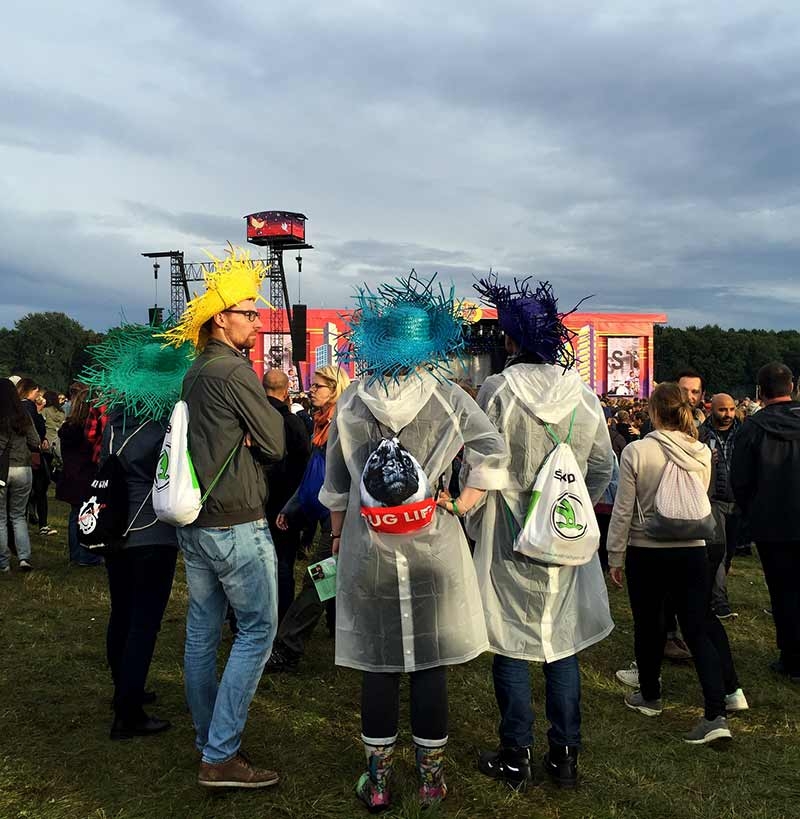 And even though it was raining a bit, the other thing I noticed was the absence of a muddy, peaty, welly-sucking, soupy pit of ground-churned bog.

Because with this not being a summer festival in the UK, it was completely normal to experience being able to walk across a festival, in the rain, without getting stuck. 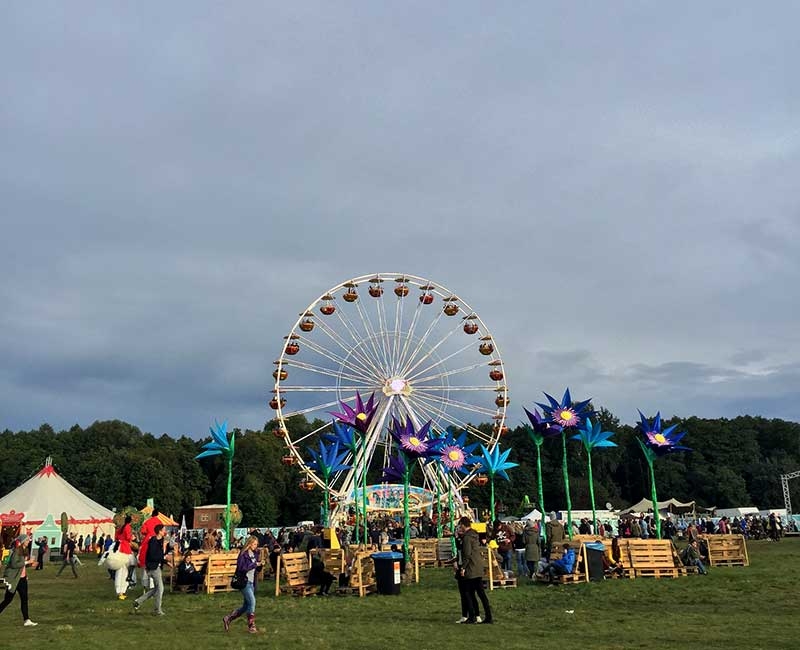 And anyway, by the time we’d had a few beers in the (sheltered) VIP area and slathered our faces in a sparkly hangover disguise, aka glitter, the sun was almost – almost – coming out. 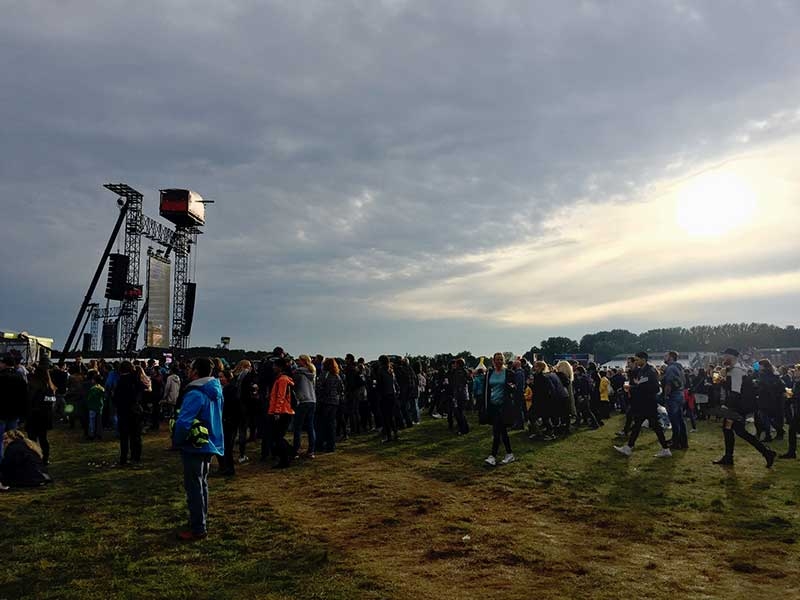 Then the Vaccines were on, so off we went to the Alternative Stage.

And apologies if you’re here to read about the music, because during this set I was distracted by the only person in the entire festival who’d inexplicably come dressed as Princess Jasmine.

It was a proud moment: not only because one of my fellow Brits was repping in stellar fashion, but also because his really IDGAF attitude succeeded in making every jeans-and-trainer clad man in that field feel slightly uncomfortable.

And that’s good enough for me.

After that we went over to Perry’s Stage.

We nicknamed this stage my Spirit Animal Tent even though it wasn’t a tent, but a techno / dance / raving / very good vibes stage where there were no queues for the bar because most of the people were on drugs.

Then, fuelled by copious amounts of beer, we spent the rest of the evening alternating between there and a structure which was essentially thousands of glittery plastic strips waving about the wind. 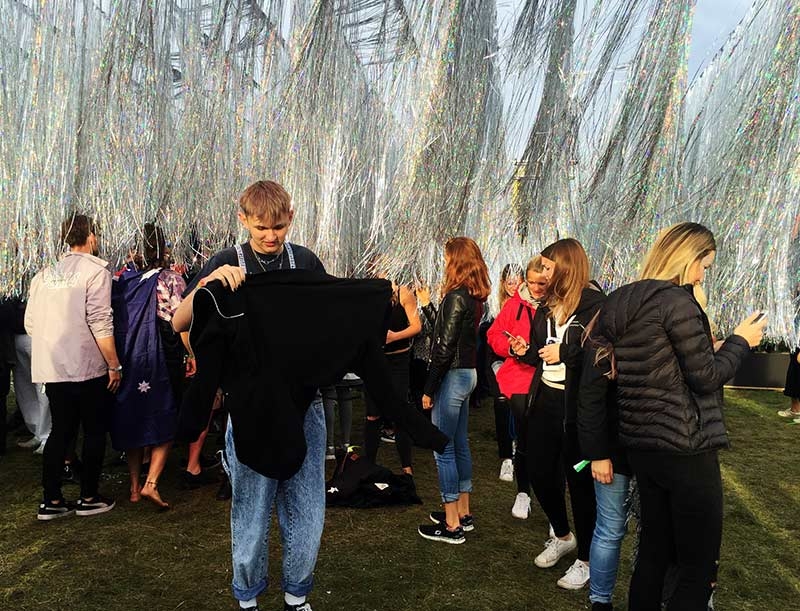 Naturally, being all sparkly natural light and soft, it was full of people staring at digital reflections of their own face.

So after a minute of standing outside taking the piss, in we went. 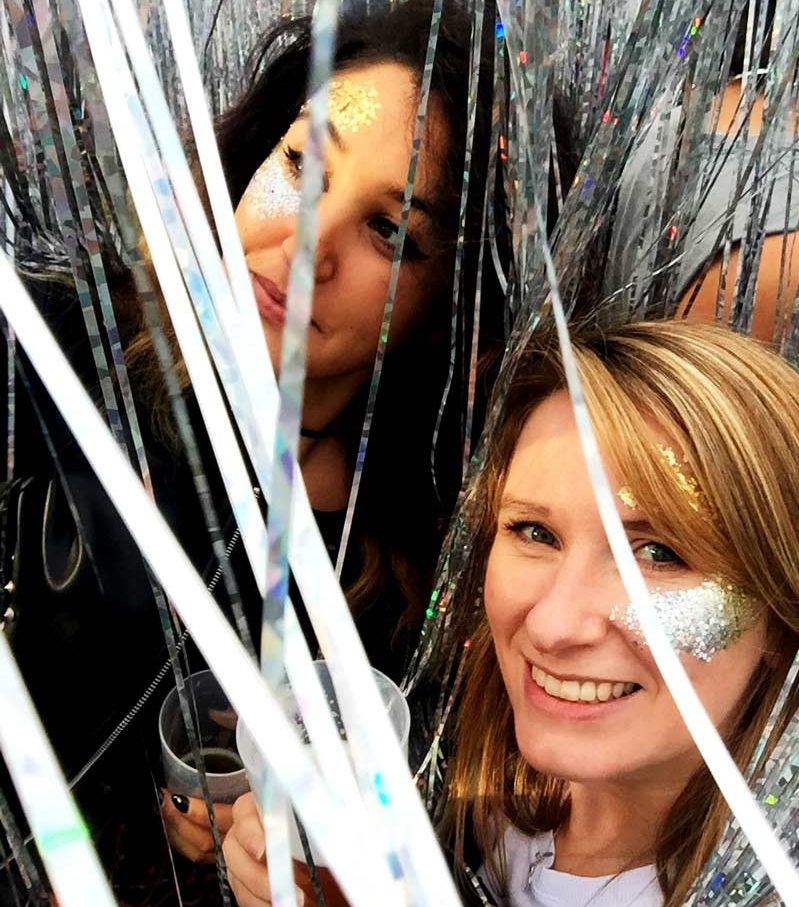 Stand out acts for the rest of the night included Two Door Cinema Club and Galantis, and also this couple who, in honour of seeing EDM producer and DJ Marshmello, had placed a white bucket on their kid’s head. 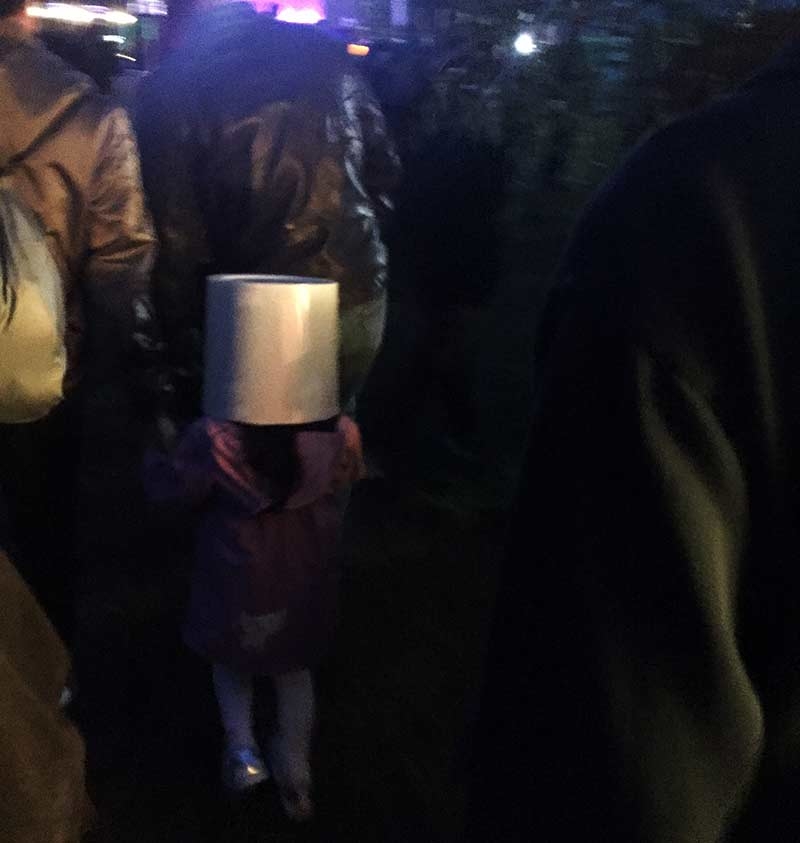 Awkward. But for everyone who wasn’t leading around a child wearing a bucket helmet, Boyz Noize made for a truly excellent night. 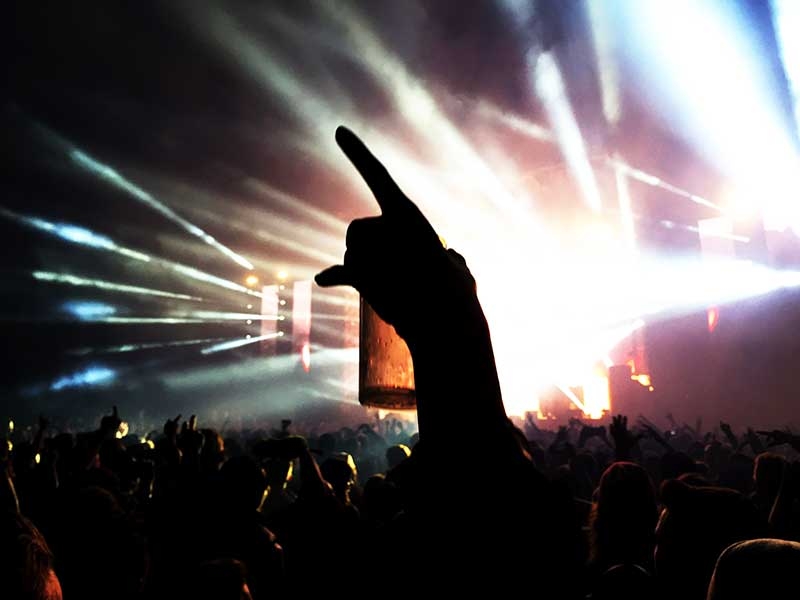 But I’m not going to lie.

There were some issues getting home because apparently getting several thousand people back into the city via one train line which only runs once an hour after 12:39am is what some would call an absolute heaving ballache, and what festival organisers would call “challenging”. We spent at least an hour packed in a packed crowd outside the station waiting for helicopter rescue, or more ambitiously, a train.

But we got home in the end, and this being Berlin it’s never too late to – if you’ll allow me to go all Time Out – “soak up the cold war vibes” of a dark, candlelit bar and rehash the moment you were one stampede away from death by post-festival crush just an hour before over 3 Euro beers. 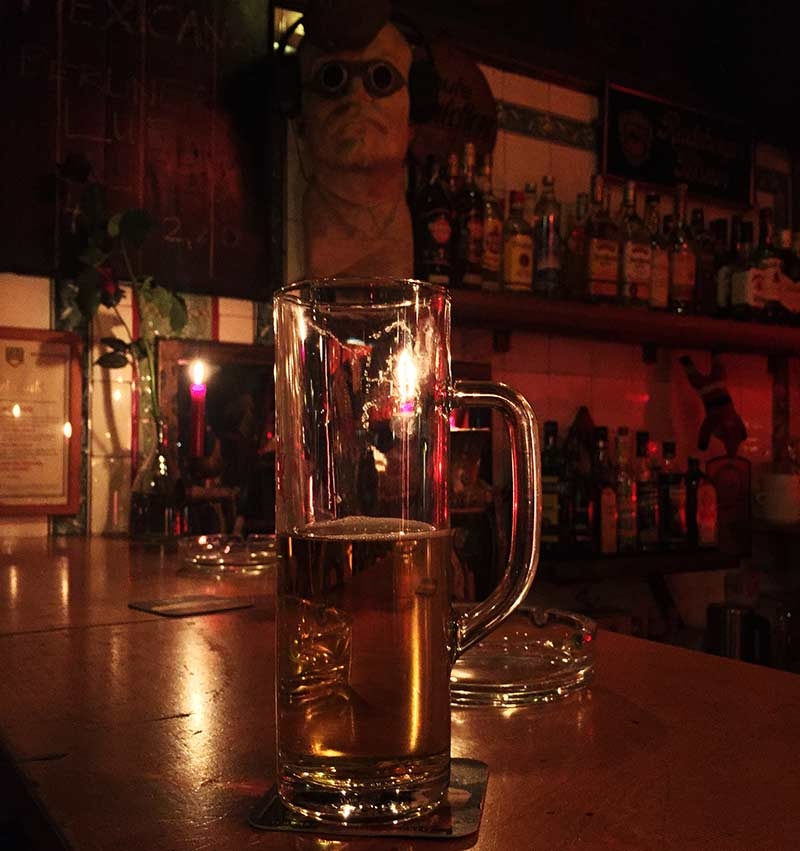 The next day was Sunday, and Lollapalooza day 2 beckoned.

At least it did, once we’d dragged ourselves up and out of bed by the frankly heroic time of 1pm.

We arrived to find yesterday’s ponchos and rain jackets had been left at home. Belongings were safely stowed in drawstring bags. There was a determination to make the most of the day ahead in the air. 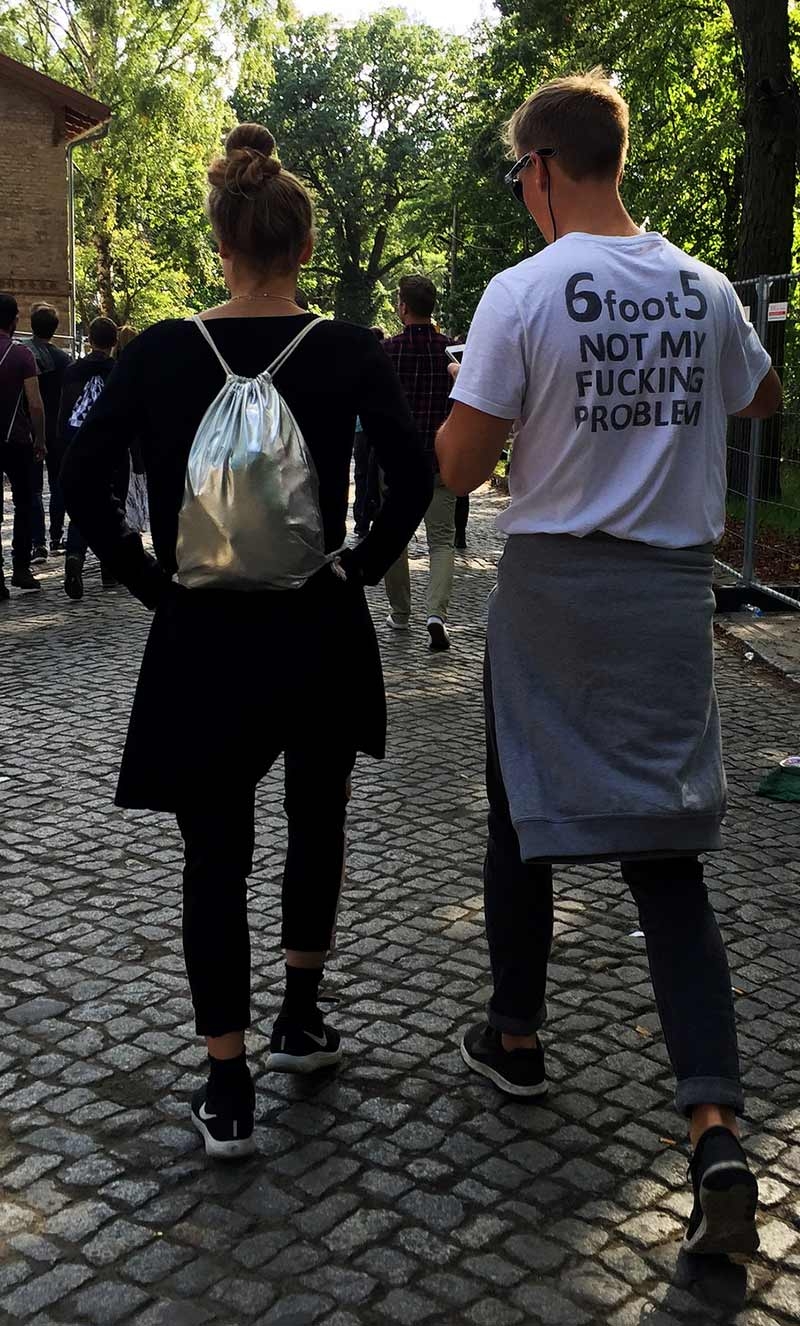 Also, the sun was shining.

This was going to be a good day. 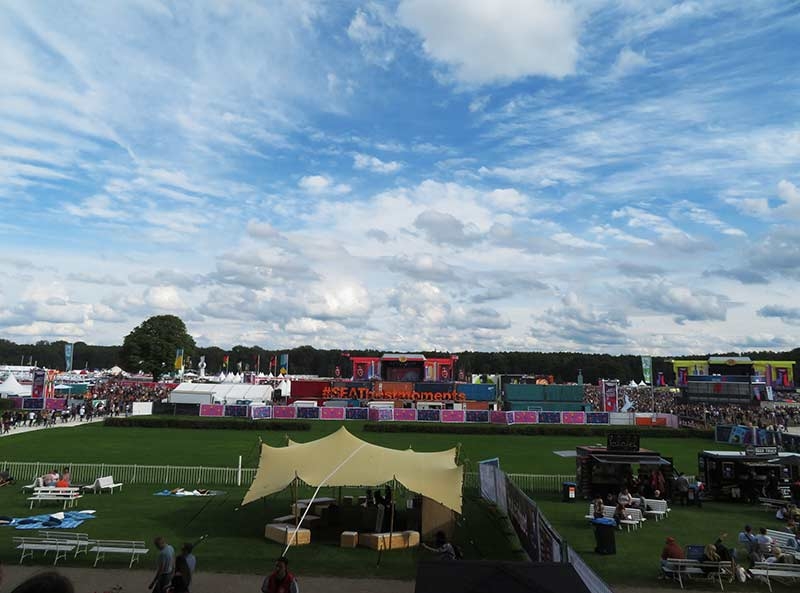 We’d gone for a couple of drinks in Friedrichshain the night before, which is German for “stayed out drinking beer until 5am again”, so we were feeling a little bit slow, a little bit… a little bit…tired.

But somehow, I don’t think we were the only ones. 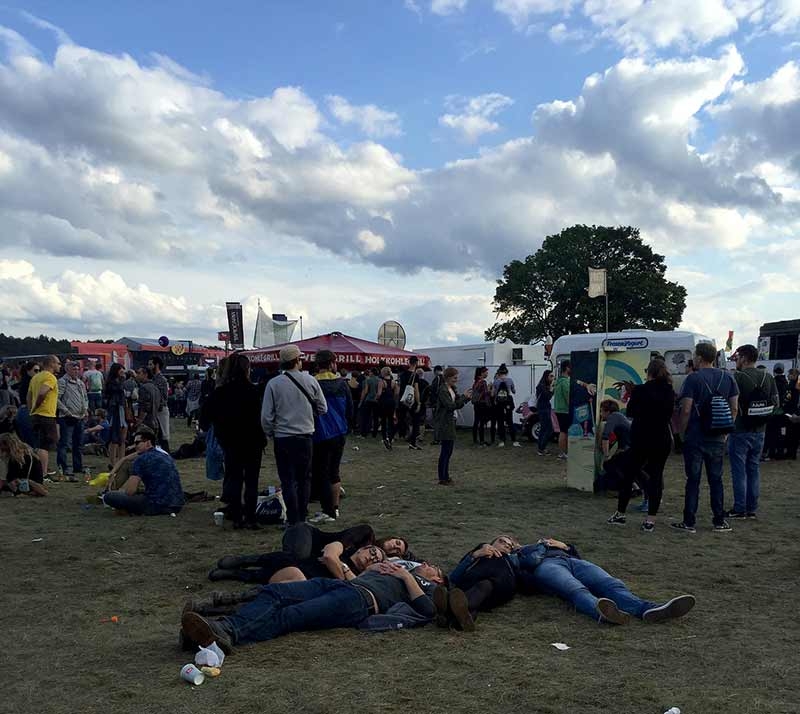 The first act we saw were the very excellent Metronomy. 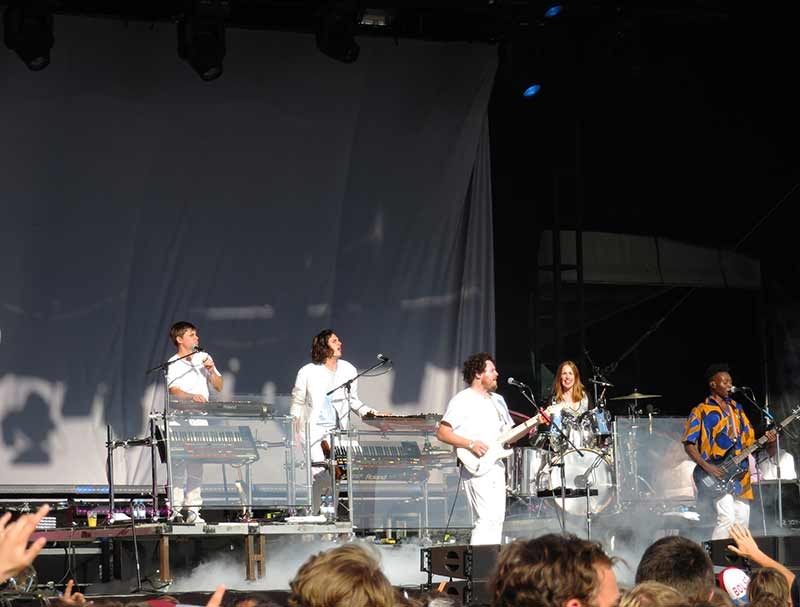 Then it was time for London Grammar.

Which I was totally going to take a photo of, but then I got mildly distracted by this Octopus balloon. 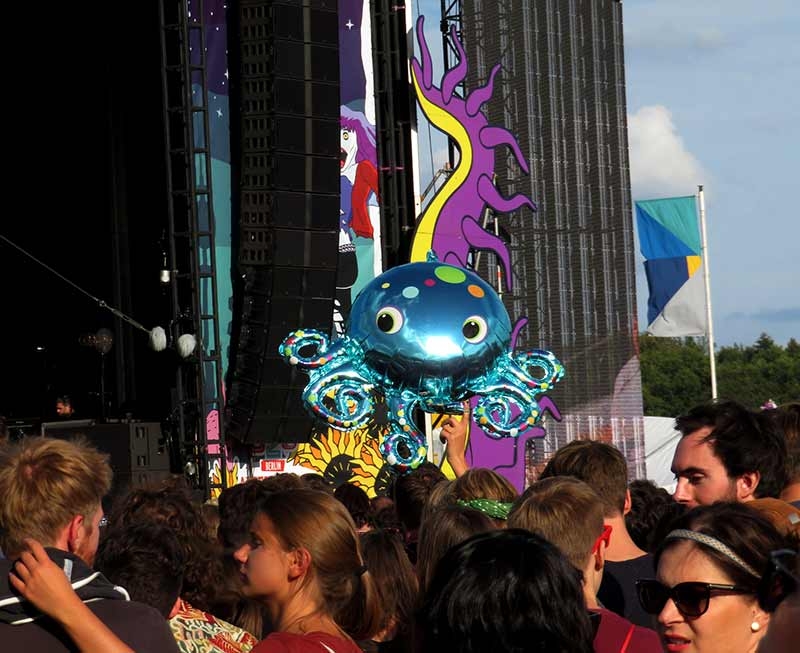 And then finally, it was time.

Dave Grohl and Taylor Hawkins came on just in time for sunset. 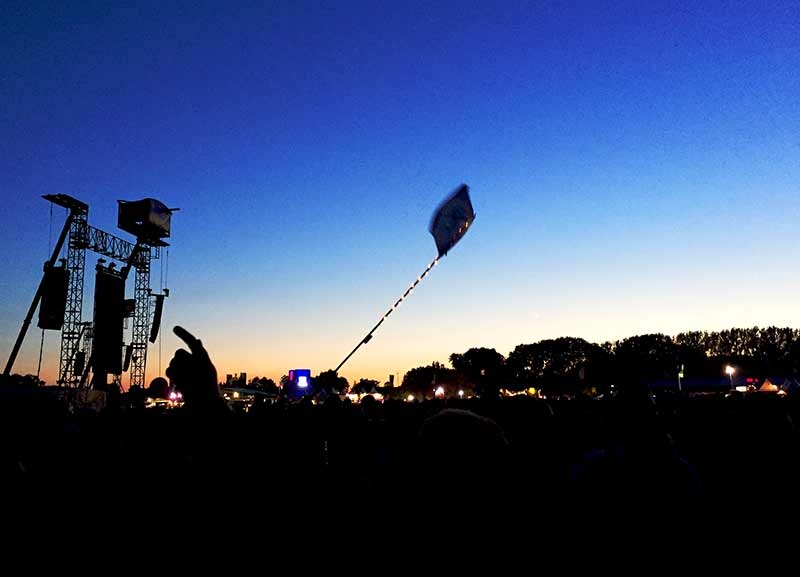 The Foo Fighters had arrived. 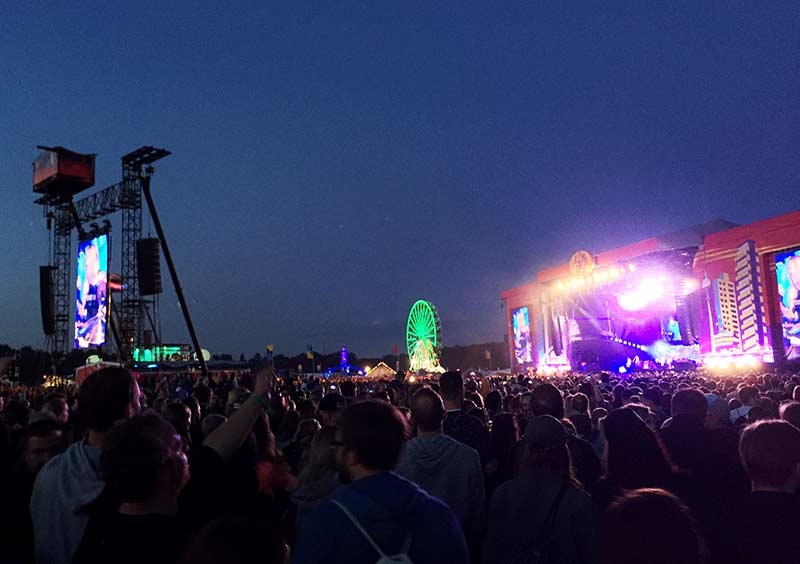 All in all, it was an excellent weekend.

We rounded the night off with a strobe-happy wonder-show from the xx, and had three hours sleep before going to airport at 5am on Monday morning and flying home. And for some of us, straight to work. Because if you’re not going to plan ahead, you might as well suffer the consequences.

Same time next year? Yeah. I reckon so.