Have you been to Japan?

You can usually tell if someone’s been to Japan because they’ll tell you about how good it is without you even having to ask.

Even if the conversation is about something entirely un-Japan related, even if you’re talking about painting your house or how much you like rabbits they’ll pipe in with something about Japanese houses being wooden and Japanese rabbit cafes being the next big thing.

There’s even a Wikipedia entry for people who get a bit obsessed with the place. And much like other things that don’t make sense at first – dachshunds, short hair, spending £750+ p/m on rent, that bit at the end of yoga where you lie on the mat breathing – you’ll only really understand once you’ve been there yourself and seen the light.

For me, that light shone down within five minutes of my arrival at Tokyo Haneda International airport, which is also the time it took for me to find and use a toilet. Because Japanese toilets aren’t just toilets – as you’ll gather from the amount of times they come up in this blog post – they’re machines; machines that understand and cater to your innermost wants and needs.

Over the 11 days I was in Japan, I realised that toilets are just one of the things that Tokyo does very well.

In fact most Japanese cities I went to had their shit together – no pun intended – in a way that London categorically does not.

So here are the ways in which London could, quite frankly, try a lot harder. 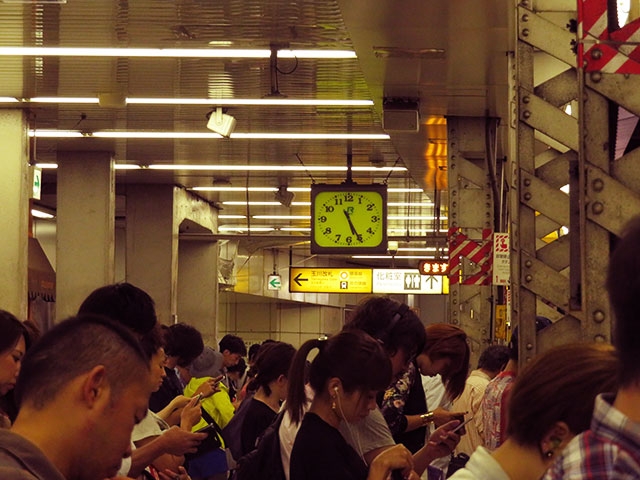 1. Tube platforms could let you know where the doors will open

I know we’re all quite proud of knowing exactly where to stand in order to be first on the tube, and I realise that if this came into effect, us Londoners would have to find some other way to prove our superiority over tourists and other people who haven’t lived here long enough to know this important, life affirming stuff.

But wouldn’t it be better if there were, you know… just… markings on the floor letting you know where the doors will open and where to stand if there’s more than one of you waiting?

I know, it’s a crazy idea. But on the other hand… it just…sort of… works.

2. We could have loads more public toilets

Fact of life: you can never find a toilet in London.

And perhaps they won’t be near a McDonalds, or have 30p handy in exact change, or want to risk angering the owner of a Soho pub by nipping in without buying a pint, or want to beg the bloke in Costa for the key to their one, solitary loo.

So imagine a world where toilets are everywhere. A few in each big train station. One in every convenience store. Several dotted all around the park. A couple in every tube station.

What would my day be like? you’re no doubt wondering.

I’ll tell you. Your day would be much better, and it would also take a long time to get anywhere because you’d end up drinking so much water – because you can – that you’d feel compelled to stop at each one you passed primarily because you need the loo but also for the novelty alone, because you can.

3. Annnnnd perhaps those new toilets could have heated seats 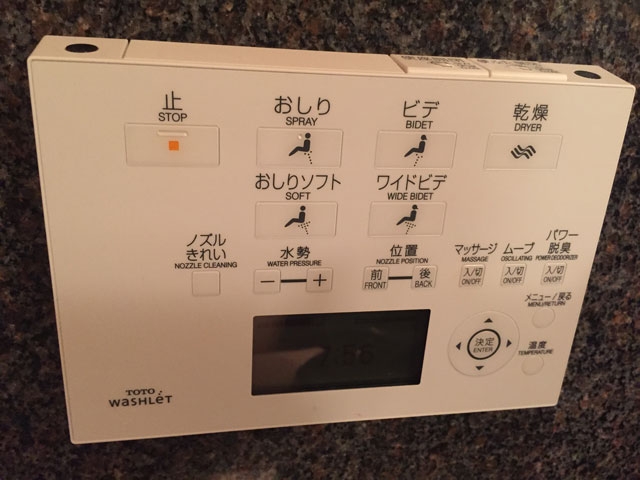 4. We could have designated smoking areas on the street

Fact: Walking down the street trying to dodge the smoke being exhaled from the mouth of the person walking in front of me

+ having pavements that aren’t littered with dropped cigarette butts

4. Oyster cards could also work in vending machines AND shops AND in other cities

I know we’ve got Oyster cards, and we’ve also got contactless, which, while we’re on the subject, don’t you think it’s weird that we’ve gone from having to verify everything with signatures, to typing in a secure PIN code, to suddenly actually you know what sod all that, who cares, just tap the card on the machine and there’s your drinks?

Anyway! How about a combination of the two, where we have smart cards that you top up and allow you to pay for stuff at shops, tube stations, vending machines, buses, lockers, loads of stuff, and let you also do that stuff in, say, Manchester and Brighton as well?

And when I say “more”, I mean every few steps I would like there to be a vending machine selling water and ice cream and umbrellas and beer and green tea and everything else you might need in your bag for the day ahead, but neglected to pack when you left the house that morning because you still haven’t mastered getting stuff ready the night before even though you’re 31 and probably should be more organised by now

6. Our restaurants could be a lot less “faffy”

…then the waiter goes away again, and then you order food. Then the food arrives and you eat it, you spend 5 minutes trying to get some ketchup for your chips, then there’s a gap where they clear away the plates, then you’re offered dessert, then you wait to flag them down or do The Eyes or the Finger on Palm Wiggle, you wait for the bill, you pay, you panic about whether to leave a tip or not, you leave, and you panic because that took ages and now you’re late for the theatre.

In Tokyo, most of the time it goes like this:

Find place you want to eat. Approach machine outside. Select the ramen you want. Add extra egg because it’s the best bit. Pay. Get ticket. Sit down. Hand ticket to chef. Pour glass of ice tea or water, which, miraculously is already on the table. Food comes. Eat. And now, ladies and gentlemen, up you get. On with your day. We are done. On you go.

Alternatively, all hail getting up when you’re finished and paying at the desk by the door. Can we do more of this, please? It’s quicker and I’m hungry. Thanks. 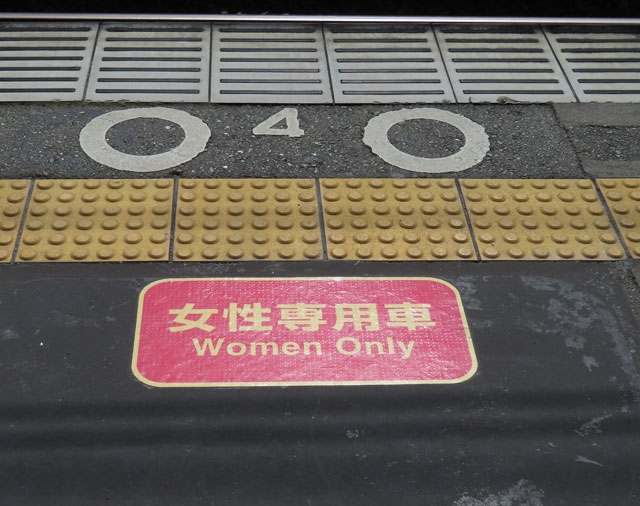 7. We could maybe try having some women only train carriages just to see how it goes

No it doesn’t address The Root Of The Problem and lol sure #notallmen.

And absolutely yes, let’s address the bigger question of why a city transport system might need carriages specifically to make women feel comfortable and safe in the first place, let’s address all that, please.

And in the meantime, I’ll put forward that travelling around in a carriage surrounded only by women and girls was just a very nice, relaxing, comforting way to go about my day, and leave it at that.

Put aside the security risk.

Also put aside the occasions in Tokyo where there were so many lockers that we had to ask for directions to find our lockers.

And that one time there were so many lockers that I took a photo of mine, wrote down a description of where it was in the station, and dropped a pin into a Whatsapp group so I could find it later.

Maybe we don’t need to go Full Tokyo on this one, but yeah, a few here and there would be good. 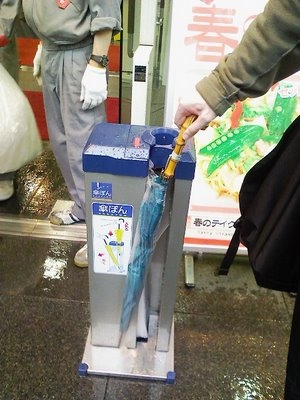 This, my friends, is an umbrella dispenser. It puts a cover on your umbrella when you walk into a shop to stop water dripping everywhere, and it’s a very good idea that could possibly make you want to go into shops just to use one for novelty value alone, but that is entirely unconfirmed.

10. Can we have cartoon characters on our roadwork barriers

There’s literally no practical reason we should do this in London. But I saw these in Osaka and I just think making our city look more like a LEGO playset would be a good use of taxpayers’ money. 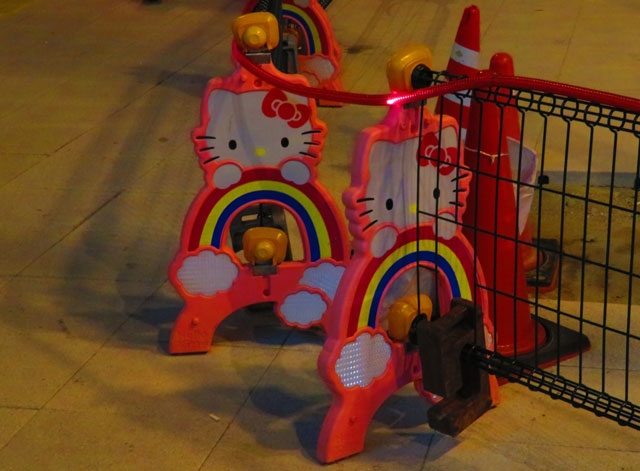 I’m also aware that after about 4 months of not writing anything on this blog about how much I love London, I’ve now returned with a blog post which is basically about how much Tokyo is smashing it in comparison.

I know how it looks.

But on the plus side, I’m back. Stop complaining.

And did I mention Japan’s really good?