Here are a few things you should know about me:

1. On average, I lose one Oyster card a month

2. Despite evidence to the contrary, I remain convinced you can get anywhere in London “in about twenty minutes”

3. If I ever get tickets to a big outdoor event, it will rain 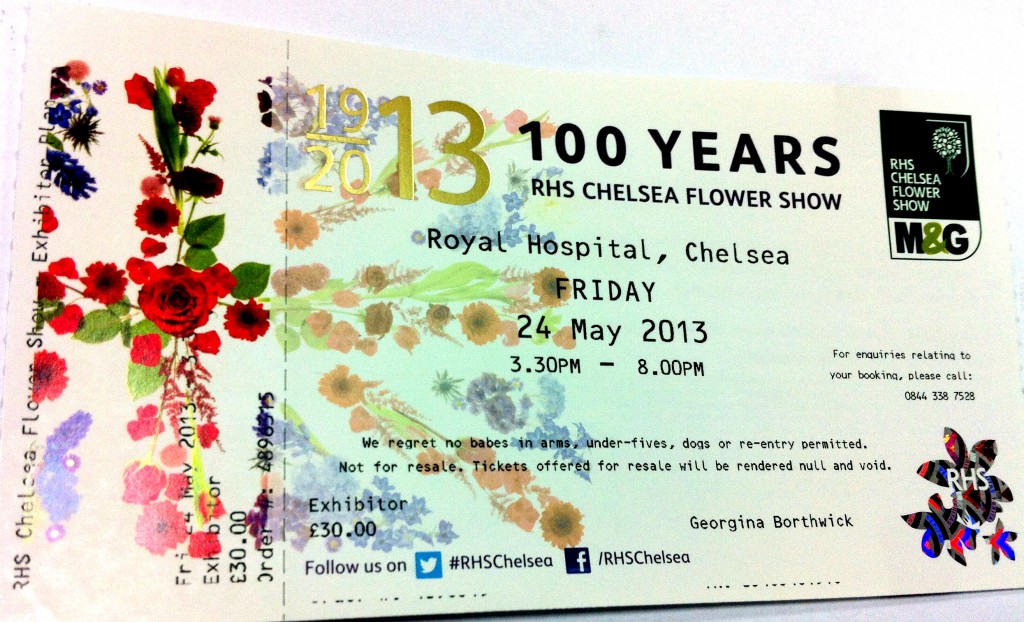 So in accepting a ticket to this year’s Chelsea Flower Show, I knew that precipitation was pretty much guaranteed in the same way that I knew last year’s maiden voyage to Film4’s Summer Screen at Somerset House would be subject to Noah’s ark-style torrential downpours. And, well, whaddya know?

Which brings me to the final thing you should know:

So when Friday rolled around and an inordinate amount of the wet stuff was falling from the sky, I wasn’t at all surprised. But I decided to follow the lead of Embankment tube staff, who were in a somewhat celebratory mood. 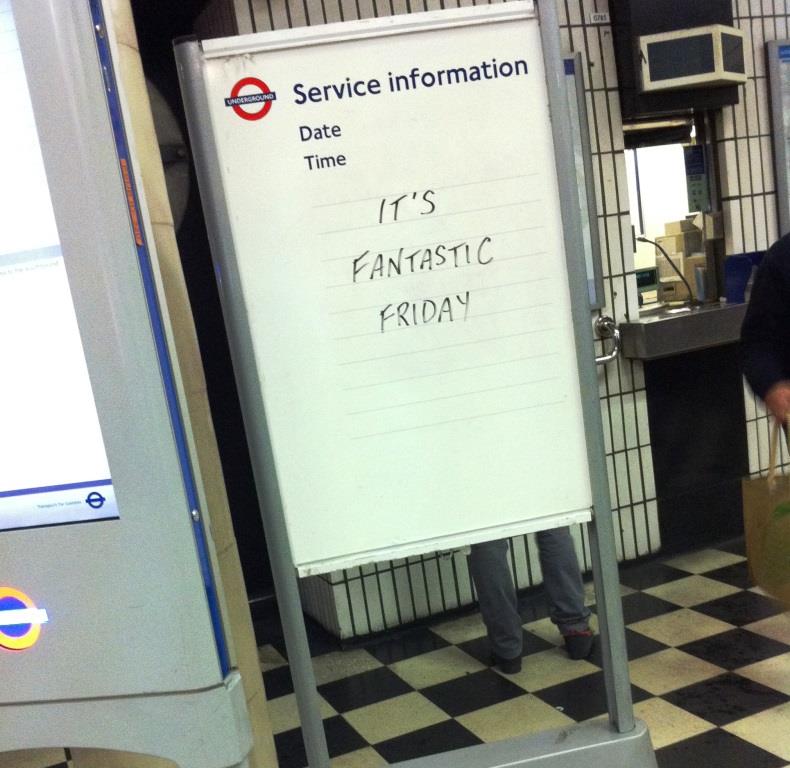 The nearest station to the show was Sloane Square.

But once I got there I wasn’t exactly sure where to go or what to look out for. A makeshift field? A large greenhouse? Clare Balding on stilts?

Instead of looking at a map or asking for directions, I decided to follow this man because something about him just said “horticulturalist”. 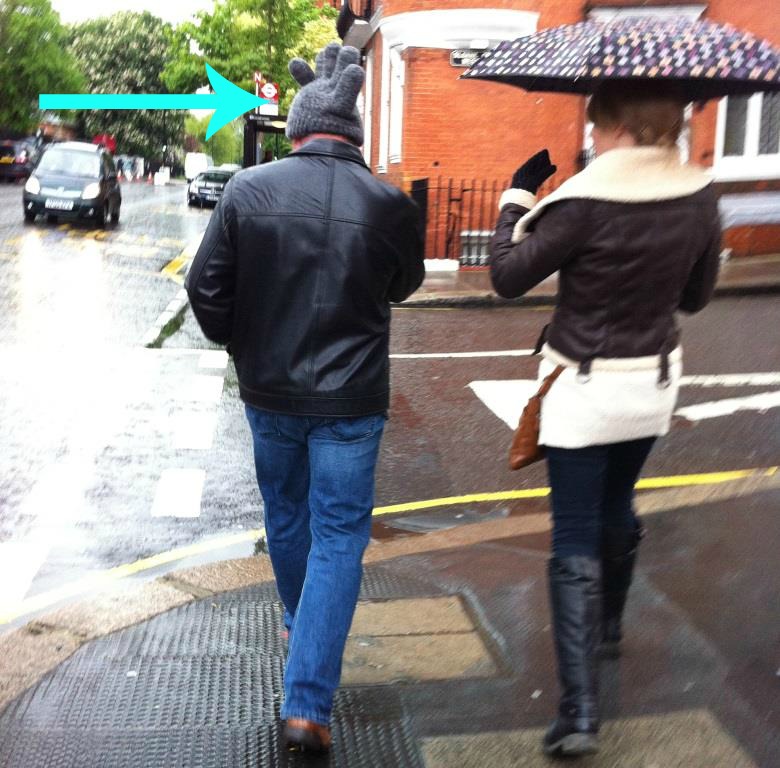 Luckily, my hunch was right.

So once in the grounds, my next task was to find the East Village Garden because they gave me the ticket, so I set about asking people with “Ask Me!” on their tabards where it was.

“Where is the East Village garden?” I said to the tabard wearing man.

“Do you mean the artisan gardens?” he replied.

“Yes, probably” I confirmed, having no idea what that meant.

“It is that way” he said, pointing in entirely the wrong direction.

Which is why instead of finding the East Village garden, I then spent some time considering an aesthetically pleasing woodland scene made of wire. 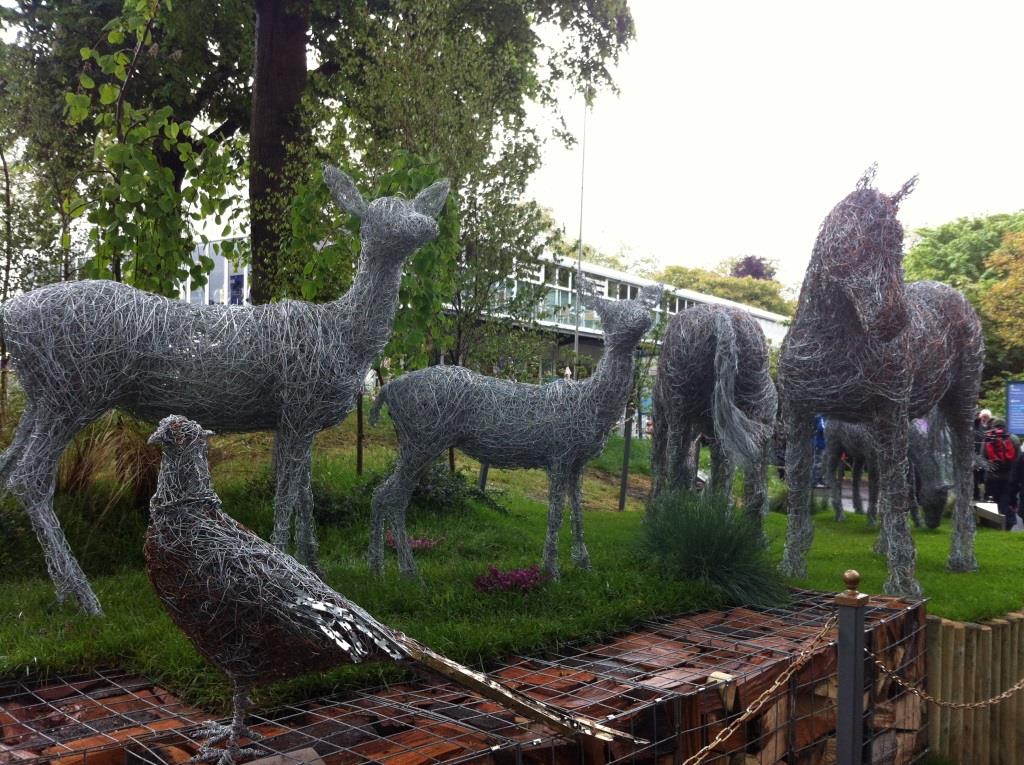 Eventually, after looking at lots of sheds and animals made of driftwood, I found a big white tent with loads of flowers in it.

“Aha” I thought, seeing petals. “This must be where the gardens are.”

Looking back, it did seem strange that the gardens weren’t outside, because that was where Carol off BBC Breakfast seemed to be when she did the weather from there earlier in the week.

Another red flag was that some of these gardens were also upside down, which I thought was a bit odd and indicative of the fact that maybe these weren’t the right gardens after all. 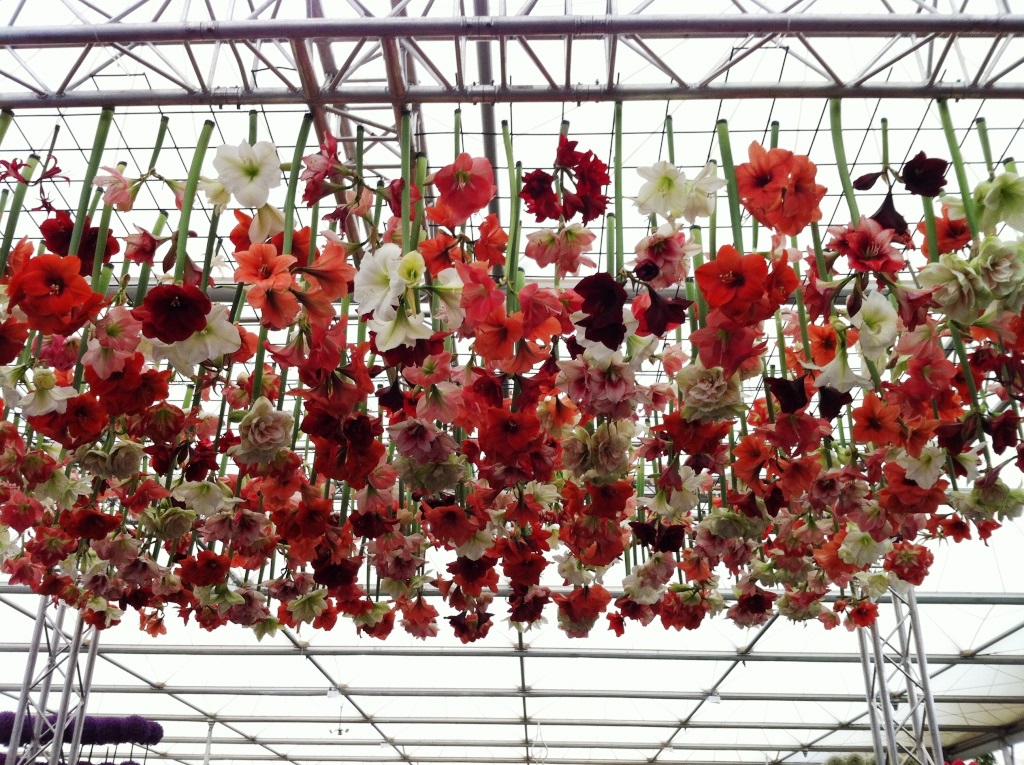 At this point I decided to approach another Ask Me! person to see if they knew where the big gardens I’d seen on TV were.

“Excuse me, do you know where the East Village garden is?” I said, craning at her map.

“Do you mean the show gardens?” replied the tabarded woman.

“Yes, probably.” I replied, not really knowing what that was, either.

“They are outside, right on the other side of this tent.” she said, pointing to the exit furthest away.

Another ten minutes passed, during which time I wondered whether I would be the first person to leave Chelsea Flower Show without seeing any gardens.

Then I got distracted by a flying dinosaur. 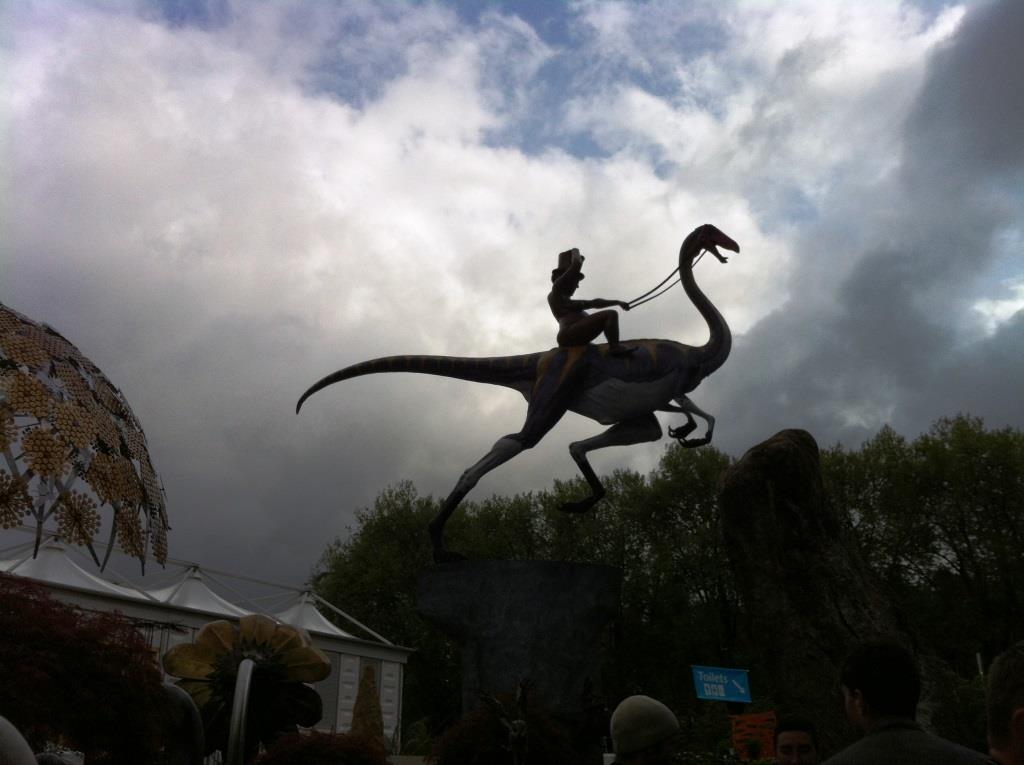 And suddenly, it was like magic: the rain stopped, a slither of sun came out (people actually cheered. They cheered the sun), and the sea of OAPs parted in front of me. Finally, there it was.

I was worried that walking around the East Village Garden might be like when someone invites you round to their newly decorated house to “see what they’ve done with the place” and you have to say oh that’s lovely, even when you don’t know the first thing about interior design or wallpaper except that if you leave Bluetac on it for too long then it makes a mark.

Let’s just say my knowledge of flowers is…limited, at best.

I once kept a bunch of roses in an empty Ariel tub.

Shall we move on? 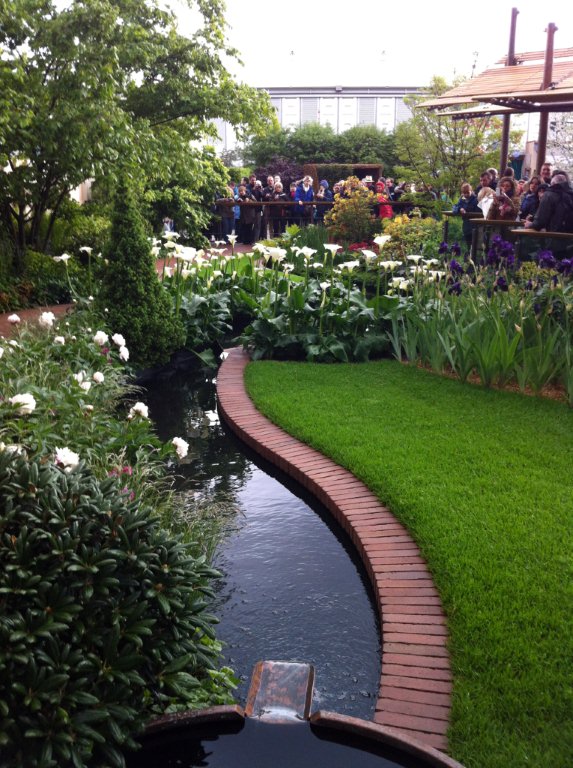 But thankfully, I’d landed an up close look at what was by far the nicest* garden I’d seen all day.

It had this clever black hole thing in the middle of the water feature (technical term there) and I think that was my favourite bit.

Generally, it was just a bit cool to be able to get in a garden and see everything away from the crowds, while all these old people around the outside looked in wondering “what the hell is she doing in there?”

*it was the only garden I’d seen all day. 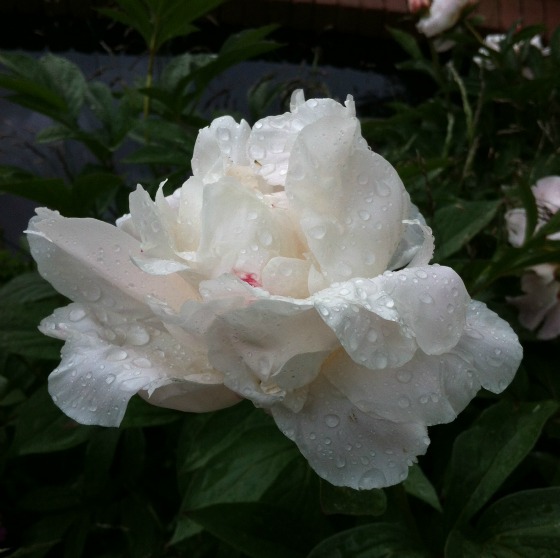 In lieu of a notepad, I engaged my Thoughtful Face and pretended I was there to do Professional iPhone Photography, and I’m not going to lie – after snapping this lovely little flower, I sort of got the taste for it.

Plus now I’d found the gardens – sorry, the Show Gardens (another technical term) – there was basically no stopping me. 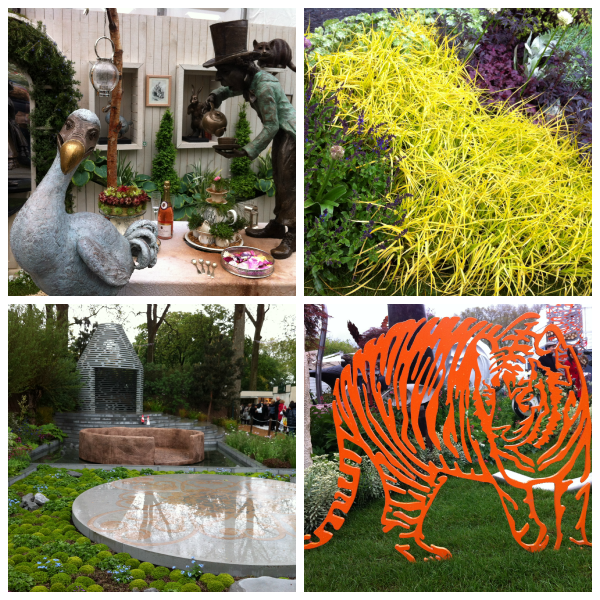 I decided to leave after a while because my fingers were going numb, and I heard that Fantastic Friday was continuing down at the pub.

But despite the rain, it had really been a lovely afternoon seeing what goes on at this 100 year old London institution.

Thanks to the East Village folk for shuffling me in to my first flower show (centenary edition, no less), and if you didn’t go because west London is a like a far away Never Never Land, I saw some advertising about an alternative Chelsea Fringe in Dalston, so maybe you’ll be into that.

Don’t worry, I won’t go, so there’ll definitely be sun.

Did you go to Chelsea? Have you ever been? Did you find the gardens?