It takes confidence, a ballsy attitude, a vague sense of direction or in lieu of that, a working sat nav. And in order to stop yourself becoming bus fodder, the biggest 4×4 you can find.

Part of the battle is keeping on the right side of your fellow drivers. Not literally, btw, because we drive on the left. But they’re a ragey bunch in Zone 1, and hell hath no fury like a Black cab driver cut up on the A40.

As a general rule, you might want to avoid doing the following things.

1. Getting stuck in the yellow box at traffic lights

Don’t go anywhere near those yellow boxes. Those yellow boxes are expensive. Not sure whether you’re going to make the lights, and the traffic’s backing up on the other side? Stay. Put. Don’t try and squeeze yourself in, unless you want to part with a nice lump of cash.

There’s a reason those buses and taxis are zooming up the inside – they’re allowed to. You’re not. Keep a close eye on the bus lane signs: usually between 7am and 7pm Monday to Friday, they’re a no go. On Sundays you might be better off, but not always. I know. It’s confusing. Just don’t follow the taxis, basically.

I mean, obviously. But just in case.

4. Forgetting to pay the congestion charge

If you’re driving through the city during the day, you mighttttt want to double check whether your sat nav’s going to take you into the charging zone. It costs £11.50 and runs during the week, Monday to Friday. More info here.

There’s a fine balance between edging out of a junction because you’ve been sitting there for about an hour, and the traffic isn’t letting up, and the only way you’ll get out is by forcing yourself into a path of oncoming traffic… but, you know, edge forward with care. You don’t want to be on the receiving end of a bus driver horn.

You know how if you were in the jungle you’d probably stay the hell away from a giant red spider? Yeah. That’s like the red lines on the side of the road in London. Don’t stop on them, don’t pull over on them, don’t briefly pause for 1 second on them while your passenger leaps out and hurls themselves onto the pavement. They will find you.

7. Being an annoying, indecisive driver

As I said, this is London. We walk quickly, we drive quickly. Well, we would if the traffic ever eased up, anyway. No one’s saying you’ve got to break the speed limit, but don’t dawdle around. Get in your lane quickly, and edge out when you can. If you’re not sure where you’re going, pull over quickly and work it out. Don’t pootle along at 3mph swerving between lanes because you’re not sure which one to go to.

Avoid breaking down on top of a Keep Clear sign, blocking a junction, next to a bus lane, on one of the busiest roads in central London, say…The Strand. 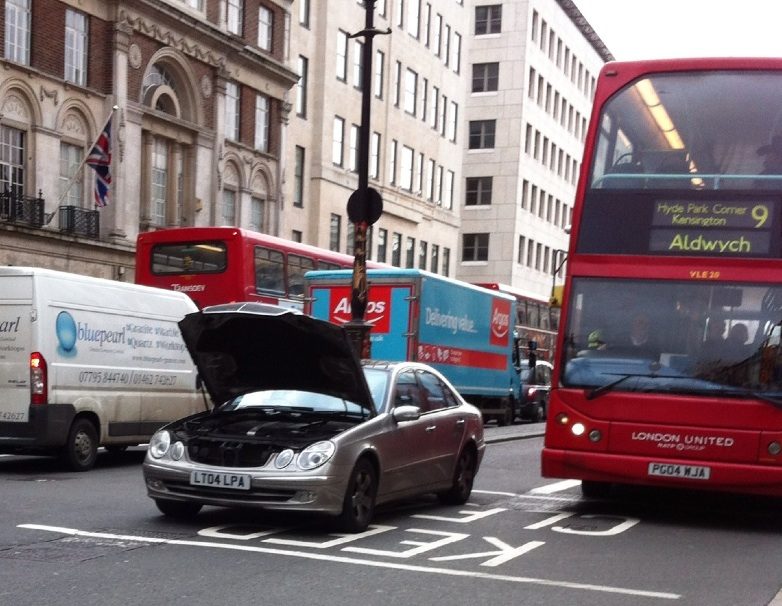 I hope you found this helpful. Got your own? Leave ’em below.