From this summer, you won’t be able to pay cash fares on buses any more.

The reasoning behind this can basically be summarised as:

“well chaps, we’ve held a consultation and two-thirds of 37,000 survey respondents have said they still want cash fares on buses, but we’re going to ignore those people and scrap them anyway because when you think about it – oh, you know what, it’s late and I can’t remember my point. Jagerbomb?”

Now, I am one of those 37,000 people who said “actually, I rather would like the choice to pay cash”, which means TFL is ignoring me, and that makes me a little bit annoyed.

Number one: no Londoner with a brain willingly pays cash over Oyster. We know it’s more expensive, therefore 1% of people are using cash out of necessity.

Number two: sure – they’re introducing a “one more journey” feature, which means you can get the bus even when you don’t have enough money on your Oyster card.

But what if you don’t have an Oyster card, and there isn’t anywhere open selling them?

Say there’s this one girl – let’s call her Jo for arguments sake – and she lost her Oyster card 8 times in one year, and now once again she finds herself at 2am on Waterloo Bridge, scrabbling around in her bag, patting her pockets and realising oh, bugger, it’s gone again.

Then the bus comes and instead of just being able to pay her way home in cash, she’s a bit stuck because that’s not an option.

(I know, who loses their Oyster card that many times? That would never happen. What an idiot.) 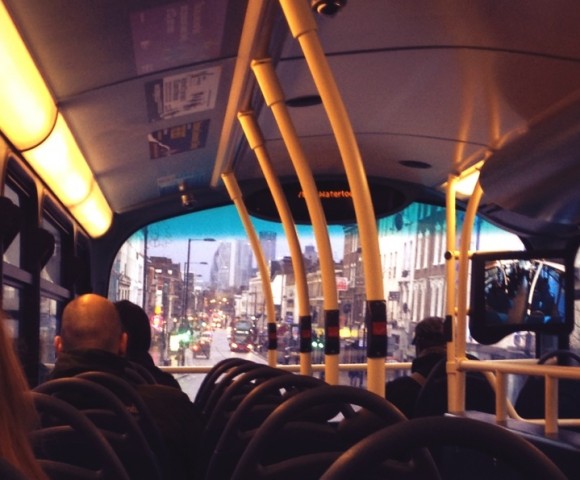 TFL think they’ve solved this by training drivers to be more lenient towards “vunerable” passengers at night.

By “vunerable”, I am asumming they mean “pissed, Oyster-less females”, but even so, this doesn’t really fill me with confidence.

Because as anyone who has taken the bus regularly in London will tell you (and I’m not sure whether TFL’s policy makers are included in this, I’m guessing not) – bus drivers are humans.

Humans tend to get a bit cynical and ratty at the best of times, let alone when its 2am and they’re trying to transport 200 drunk people from Waterloo to Dalston while they’re all singing a rude version of “Kumbaya”.

I mean blummin’ hell, I got an earful from a driver for wanting to get off at the front of the bus once because it was too packed to get through to the back doors. Know what I mean?

So basically, I’m not convinced that training will prevent the bus driver from not feeling all that charitable towards the girl who has “lost” her Oyster card, if he’s just had an earful at the stop before.

Simply put: how will they be able to tell the bluffers from the genuine idiots who lost their Oysters and just want to get home?

Londoners, it looks like we’re going to have to work on our “vunerable” looks. Either that, or just stop losing our Oyster cards. What do you reckon?