It’s annoying that September’s over.

Firstly because I can no longer legitimately get away with saying “it’s my birthday” in October, but also because it’s getting dark which means I’ll have to stop walking home along the Regent’s canal in the evening.

Strictly speaking, I don’t have to stop.

It is indeed my right as a human person to continue walking home even when it’s dark or cold or a bit rainy – but let’s face it, walking along an unlit stretch of canal just isn’t as good in the pitch black.

And when I say isn’t as good, what I mean is “not as safe because I might get set upon by a predator lurking in the shadows”.

You know, just so we’re clear.

Granted, before it got dark, there were other things to be wary of.

In fact, there’s a bit of an unspoken war on the tow path between cyclists and walkers. But that was almost what attracted me in the first place. 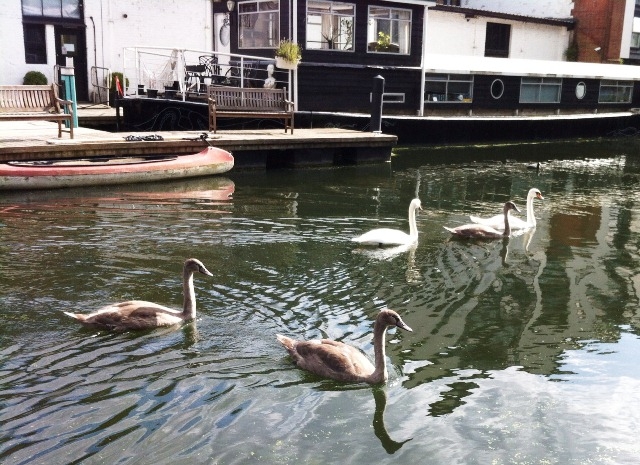 This was my first summer of being able to walk home from work.

Before this, I’d look longingly out of the bus window and see all these enraged cyclists driving up the rear of walkers along that skinny little tiny towpath, furiously ringing their stupid bells as if they’ve got right of way (they haven’t), and think I want to be one of those people getting in the way of cyclists too.

Then I moved jobs and finally it would take me 55 minutes to walk instead of 2347897345 hours – so all through spring and summer, it’s been a little high point of my day. I could become one of those indignant walkers with Right Of Way.

So it’s been good, the walk home. All that mucky green water, seeing loads of dogs, watching geese attack each other, marvelling at the amount of people who seemingly have nothing better to do with their day than sit alongside the canal drinking Red Stripe on a Wednesday, peering into houseboats, it’s been a lovely time.

(*Unless it’s the daytime at weekends. Then it’s fine.)

Get posts to your inbox: subscribe by email here.