So at the beginning of this year I got hold of my mates’ addresses, bought a load of envelopes and stamps and decided to start sending them things in the post.

I’m a bit rubbish with remembering birthdays, so usually it’d just be random cards saying hi, or thank you, or crappy Valentine’s Day from Oscar the Grouch; or congratulating them on not killing their first outdoor plant, but occasionally there’d be one to commemorate something really really important or a momentous life event.

Everyone likes getting post, but not everyone can be bothered to send it.

The only stuff most of us get in the post now are letters from the Student Loan Company, or, as I like to call them, the Quarterly Statements of Disappointment, and council tax reminders, and phone bills charging you for the iPhone 5 you dropped down the toilet last year.

Also, most people who live in London rent and move around a lot, so no one gets post because no one except your parents really knows where you’re living now, and to be honest, neither do we, most of the time.

So although I sort of hoped to get the occasional letter back, mostly I just liked to think of mates coming home after a crap day at work, seeing an envelope with their name on it, and forgetting their nightmare commute for a minute – and maybe despairing a little bit at their friend’s lack of artistic card making skills*.

*apologies to anyone who recently received my limited edition “you as a stickman drawn with a felt tip” series. 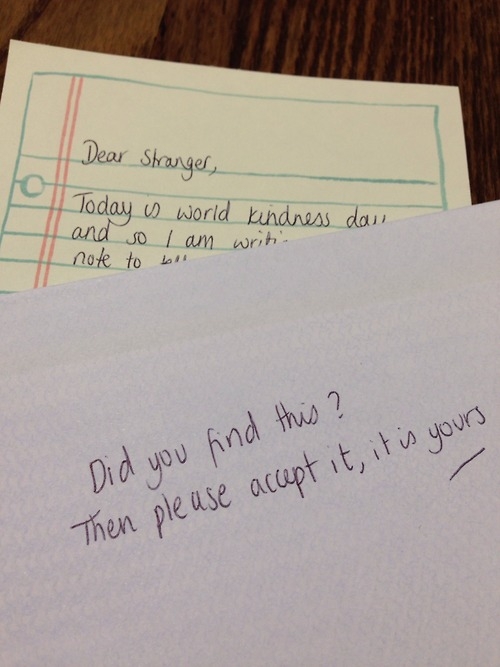 And then this week I found Letters Left in London.

It’s a project started by an anonymous person who lives in London, who’s basically been writing lots of friendly letters to strangers in the city and leaving them around the place for people to find, which is a loads better way to spend your morning than scowling at people who annoy you on the tube.

In their own words:

I write notes, letters, little quotes, poems, etc and deposit them anonymously in public places for people to find, hopefully to bring a bit of warmth to people as they go about their day. Letters telling them how awesome they are, extracts from moving poems, messages of hope. 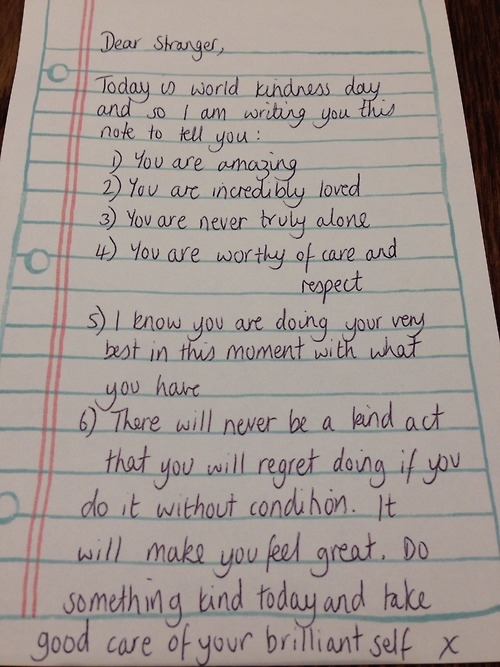 I sort of wish I’d thought of it.

Not only is it a nice thing to do for people you don’t know, but it’s also a better idea than sending letters to friends in the post because this way you don’t have to pay for stamps.

On which note, thanks, Royal Mail, for making my nice idea a surprisingly expensive one.

Anyway, the Letters Left in London are all being posted here, which is good because unlike emails, written words don’t automatically save to your sent items, and you can also follow the project on Twitter.

*They’d probably really appreciate money, but cards will do.