Yesterday I spotted this note tacked up around Islington Green in Angel. 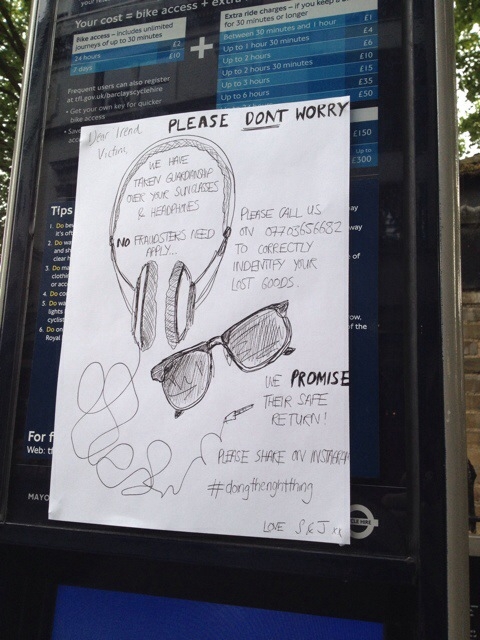 As you’ll probably have gathered by now, I’ve lost my fair share of stuff in London – mostly Oyster cards – but also some expensive items. And somehow, whether it’s an iPod left at Baker Street, an iPad on the bus, or, yes, one of the nine Oyster cards, they’ve always made their way back to me.

Once, years ago, when iPods were a thing you kept in your pocket instead of the bottom drawer of your desk alongside a collection of Ericsson T10 phone chargers, mine got lost somewhere between Baker Street and Pinner on my way home.

Then a few weeks later a note popped through the door and it was from a man who’d picked up my iPod, and he’d done some detective work and found my address on there, and sent it back along with, if I remember rightly, a Christmas card.

It heralded the start of beautiful relationship.

Along with the iPod he also sent me a not altogether positive analysis of my musical tastes, because even when they’re doing something nice, Londoners still like to assert their superiority in some way. Anyway, the important thing is I got it back.

So hopefully the Trend Victim will get their stuff back too. And hopefully, they won’t be too sensitive about being called a Trend Victim in the process.