Much like an Oyster Card, hangovers are a staple part of London life.

Last weekend’s hangover came courtesy of Saturday night in Shoreditch, where the only way to avoid the fact that you’re at least ten years older than everyone else is to drink, drink, and have another drink, before dodging the stream of piss leaking from the temporary urinal in Hoxton Square.

Like most other east London residents, my Sunday was destined to be spent on the sofa with a takeaway and the latest episode of Girlfriends (shut up, it’s well good) – better known as A Complete Write Off.

But because I have this rule about going outside at least once during daylight hours over the weekend, this Sunday I made the controversial decision to go outside.

This meant putting on a Hangover Disguise – aka, tidying up last night’s make up, chucking on a t-shirt you later realise is on back to front, and hoping you don’t bump into your ex –  before crawling up the road to Stoke Newington.

Now, for the uninitiated:

Stoke Newington is another one of those places people say has gone “a bit yuppy” in recent years. In my mind that’s probably preferable to “a bit stabby” which is what it was beforehand, but don’t take my word for it, ask one of the 3 million estate agents that moved in around the same time.

Pram-maggedon or not, I maintain that if I am ever able to afford even a small doorway in that part of London, I’d probably spend upwards of £700,000 (in fictional dream money) in order to do so.

And I won’t lie, that’s mostly because of Clissold Park…

…where there are goats. 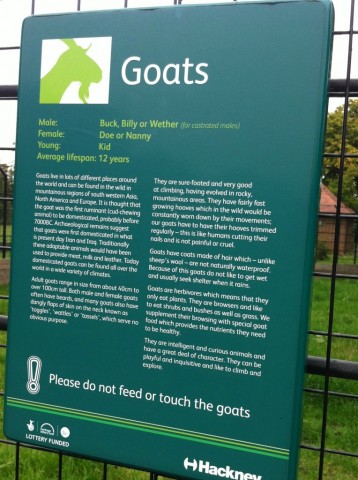 The goats (and deer, there are also deer) are the main attraction of N16’s very nice green space.

Nice, that is, when you take away the mass of selfish children hogging all the prime goat-and-deer-spotting positions by the fence.

“Why should they get all the attention?” I grumbled, swallowing another Ibruprofen. “Bloody kids. Haha, like goats. Kids. Funny.” 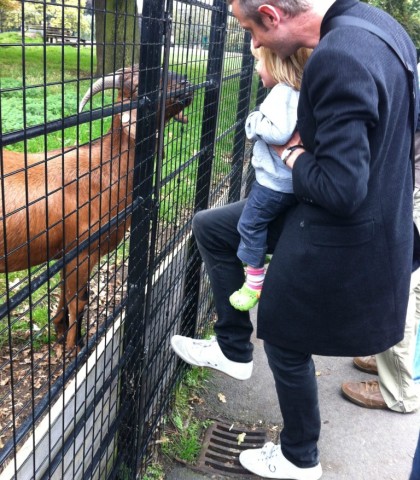 As well as the obvious animal attractions, Clissold Park is also good if you want to get a picnic blanket, tie some balloons to a tree, and host some sort of jolly Sunday shindig.

I’m still not sure whether the people hosting the shindig below – yep, the one next to a man lying face down on the grass like an inebriated domino – had already checked on his welfare, or if he was just an overexcited friend of theirs who peaked too soon.

But no matter. It was Sunday, and everyone seemed to be enjoying themselves anyway. 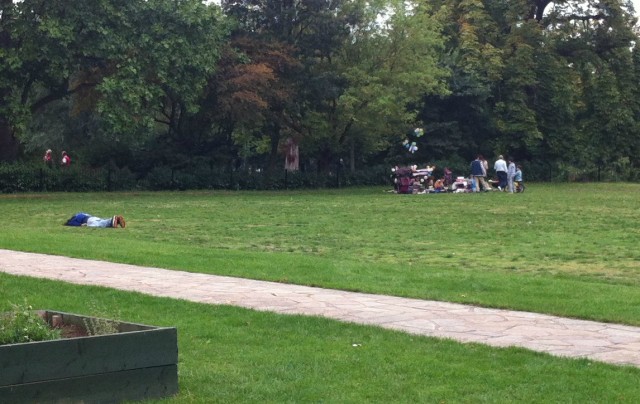 After that, I went back down the road towards Dalston.

As usual, the trendy hipster folk were all out in force, you know, being cool, ramshackle, eating their trendy lunch outside trendy cafés while nonchalantly balancing on their fixie bikes. Blummin’ hipsters, trendy hipsters, with their need to eat lunch and their facial hair and prescription glasses and skinny jeans, how dare they look like every other person in the 20-35 age bracket in London, they think they’re so cool.

And by that time, I was pretty hungry.

Luckily, my housemate and I were continuing a recently coined Sunday tradition of not eating anything that isn’t delivered to our front door by a man wearing a motorcycle helmet.

Last week, that involved getting a Chinese which we ate while weeping along to Surprise Surprise and raising valid questions like “but if he lost all his family in a car accident in Florida, why have they surprised him with a road trip across the USA to cheer him up?”

This Sunday, we mostly just gorged on around eight boxes of Deliverance – because as we’ve already established, I have no qualms about accepting freebies when they either involve a) napping or b) food. 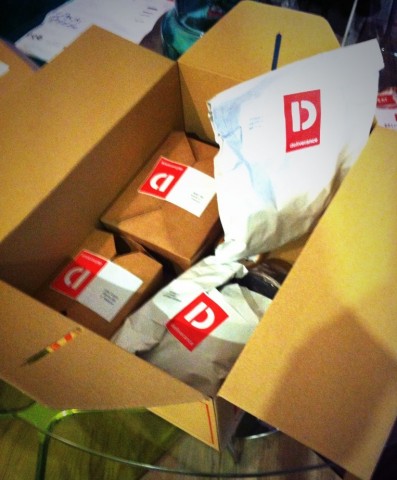 And surprisingly for a takeaway that serves every cuisine in the world ever, it was pretty good. Especially the duck, which I’d heartily recommend following up with pizza, a cheeseburger and some Nasi goreng.

All too soon it was time for bed.

When you live just off the Kingsland Road, bedtime means listening to the distant thump of bass, the not-so-distant sound of drunken shouting, a cacophony of ridiculous conversations, and the occasional botched drug deal happening beneath your bedroom window, all of which soothes you into a lovely, siren-filled sleep.

So there we have it, a successful hungover Sunday with minimal effort and maximum satisfaction. Thanks to Stoke Newington for the goats, Deliverance for the food, and the London Borough of Hackney for giving the club at the end of my road a 6am licence on a Sunday night.

See you next week, Hangover.