When I put on fancy dress, I’m often the subject of a game called “fancy dress or bad dresser?” thanks to my half-hearted attempt to channel a theme while still wearing jeans and a t-shirt.

I just can’t get into it, despite the fact that living in London means you’re often not sure whether someone’s dressed up for something or just normally like that, and you don’t even give them a second look.

Know what I mean?

However, there are exceptions to my anti-fancy dress rule. For example, if I’m wearing clothes from an era I have actually lived through (the 90s are alive and well in my wardrobe, the 1940s not so much) then that’s ok, or if the theme is “nonchalant leopard holding balloons” then I can run with that, too.

Likewise, fancy dress is fine if I’m not leaving the house, or if I’m going to someone else’s house and staying there, or I’m at Glastonbury, or if it’s Halloween.

My friend Kiki was hosting a Halloween / birthday shindig at her house in Stoke Newington last Friday, where everyone including the house itself dressed up, because that’s just how these parties seem to roll. Last time, some people even came dressed as the police, right down to the flashing lights, shouty voices and everything.

So in preparation for the fancy dress, me and Harriet went shopping.

This involved going to Primark on Tottenham Court Road and slowly losing the will to live, which, as far as I can tell, is the only thing worth doing in Primark apart from accidentally-on-purpose tripping people up.

We also got tutted at by an employee whose job description seemed to be “sweep things up off the floor”, which is a fairly active role in Primark because shoppers see the floor as a metaphor for the downfall of civilisation, as well as an excellent repository for whatever they don’t want to hold in their hands.

And because the extent of the adult Halloween clothing was itchy knitted jumpers adorned with pumpkins, we found ourselves in the kids’ clothing section instead, pondering the suitability of age 12 -13 boys’ skeleton onesies.

“It sort of fits” I said, leaping around the changing room while real shoppers looked on, bemused.

(“Is this for your son?” asked the cashier) 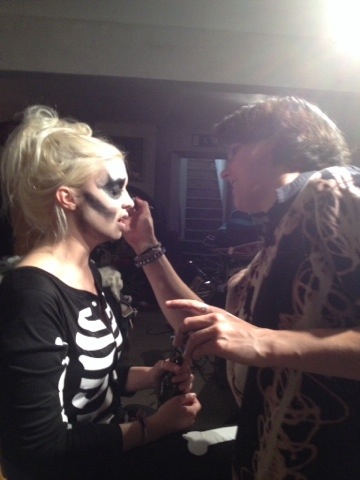 The other reason I like Halloween is the potential for distracting face makeup.

This is a handy way of deflecting attention from things such as hair that needs a good cut and skeleton onesies originally made for 11 year old boys.

So last Friday night, we collected another friend who was inventively dressed as roadkill, and got the bus up the road to Only Fools and Peacocks on Stoke Newington High Street because they were staying open late to help make people’s faces look scary. 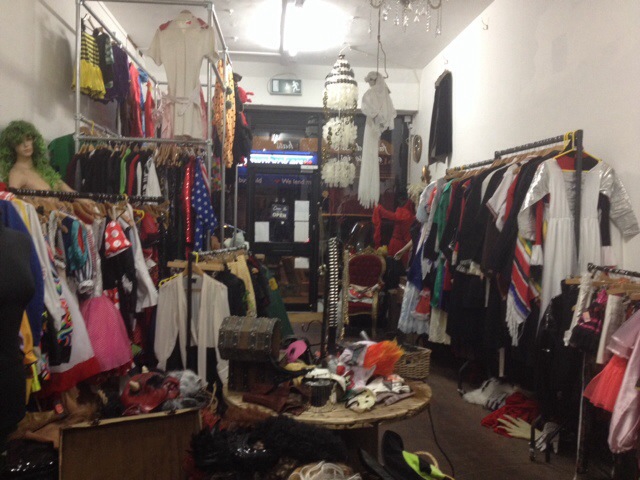 This place, my friends, is an Aladdin’s Cave of disorganised fun.

There were masks that made you look 80 and weird, and wigs, and because it was 9pm and we’d already had a few, you can only imagine our joy when the girls who run the place said they were running a bit behind schedule and we’d have to wait a little while – but hey, they said, have a play.

And play we did, by creating the Most Horrifying Selfies in the World.

After a little wait we went downstairs and got our faces done.

While Harriet went for full whack, I decided to stay true to my Anti-Fancy Dress roots and go for a half face of skeleton, the plan being that I could talk to boys I liked with one side, and boys I didn’t with the other.

In the event, I can’t remember talking to any boys, but that doesn’t mean it didn’t happen. 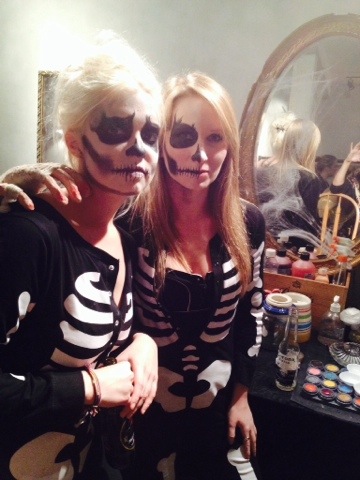 I knew they’d done a good job because we later wondered into Stoke Newington Sainsburys looking like this, and no one really cared. And the better you look while wearing weird stuff in London, the more people steadfastly pretend you’re not there.

(sidenote: if you’re getting your fancy dress face on this weekend, the girls at Only Fools and Peacocks are staying open late to do make up for Halloween. You can book a slot and bring beers and also they had a dog when I went in, and I think we all know how I feel about that).

Anyway, the party was excellent, and the 6am bus ride home wasn’t at all weird. Mostly because it’s London, and there’s no point being worried about being in fancy dress here, because no one cares.

In fact, I’d almost recommend it.

Scary clown photo credit (sorry about that): christianstevenson on Flickr