There are some very good looking places in London.

They’re what makes London better than New York. They’re parks, and streets, and houses, and landmarks and buildings that are so inherently London they don’t so much catch your attention, as grab the eyeballs from your face and turn you around.

These places refuse to give you a choice: in their presence, you can look nowhere else.

It’s something in the colour of the stone, or the detailing under the windowsills, the slant of the glass; the beige grouting between grey-brown walls, exposed foundations, tall ceilings, domed roofs and faded ghost signs advertising a service long defunct.

And once they’ve got you, they beckon you closer like a wizened old woman, they have stories to tell; these parts of London that have been there so long it’s like they grew up out of the ground.

So there’s those places.

And then there’s the Barbican.

Like St Paul’s, The Barbican is so London it’s got its own tube station, and so un-London that when you come out of it and see a grey looking underpass flanked by the great looming towers of the estate, you sort of wonder why you arrived.

The most obvious reason would be for the art and music.

The Barbican Centre is where the London Symphony Orchestra lives, and also where you’ll go to hear, among other things, the sort of music you’ll be very into if your idea of a good gig is one where you only have to stand up once, and that’s to wave your Union Jack flag.

But the Barbican isn’t just somewhere to drop your parents off for a few hours over Christmas.

It’s not even that bad looking, once you get a bit closer.

In fact, before you get inside, it’s actually pretty cool.

The best way to see all the cool stuff outside is when you’re searching for the entrance.

The Barbican manages to be everywhere you look and nowhere at all, so it’s entirely normal to spend at least half an hour working out how to get in.

You’ll especially like the High Walk if you’ve lived in London for so long that all the old stuff has started to blend into the background, and a thousand year old landmark is merely a normal thing you see on the way to work.

And when you reach that point, it really helps to see the old stuff set against the backdrop of what was once named the Ugliest Building in London in 2003.

That’s what happens on the Barbican High Walk: you look down, and there, below the rows of identical brown balconies and towering office blocks – are the remains of a bombed out houses from the war (above), a the Medieval church, and a section of the Roman City Wall so old it actually hurts my brain to imagine the time it was built.

The other thing you see are flats.

Lots of flats. Flats that no one ever comes out of. Flats where the only signs of life are the brightly coloured flowers hanging off each and every balcony.

And then you start hearing the splashing of water, and you peer over the other side and you’re like – where actually am I?

Where has this alternative universe appeared from?

Why is there a large green lake, complete with water features and fountains, and plants, and cool little walkways in the water, and a very pretty white church?

And why can’t I see all this from the road? 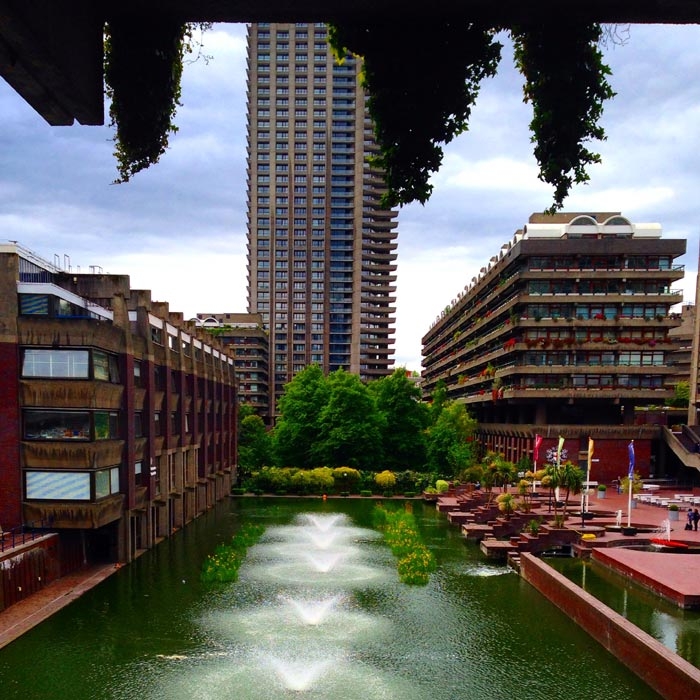 Once you get inside, the Barbican’s got most things you’d expect from one of the largest performance art spaces in Europe: concert halls, a cinema, a few libraries, photography galleries, art exhibitions, and somewhere to get a cup of tea.

So at this point, we should probably give some credit to whoever decided that what this place really needed was some terrapins, cacti and exotic trees.

If, like me, you often want to see plants without being outside and getting cold, the Conservatory is open on certain Sundays, and is the best place to remind yourself that away from the Thames, there are actually bodies of water in London that can support life like fish. 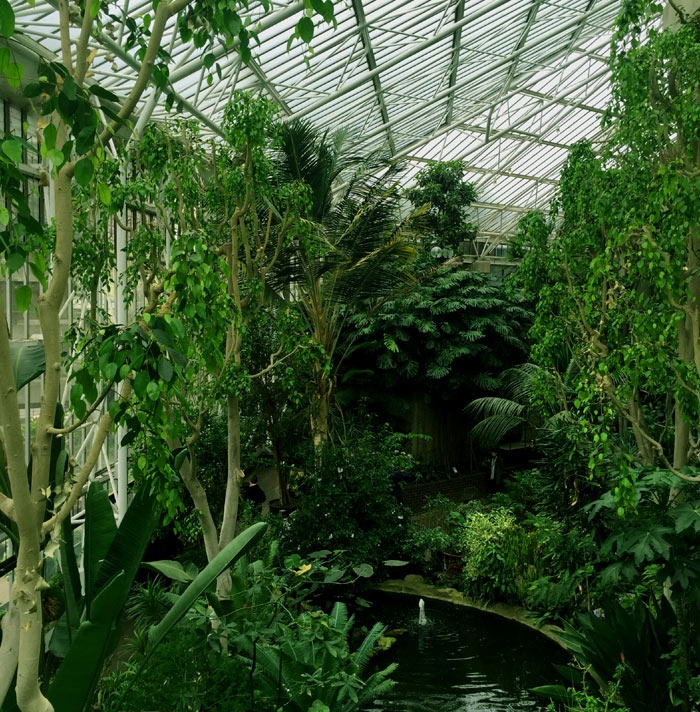 The easiest way to tell if a place in London is one of your favourites is whether it makes you do your commute on your days off.

And I have to admit that recently, this is what’s started happening. The Barbican has crept up on me. So now, if I want to do some writing, I’ll nip off to the Barbican instead of a cafe. I’ll get the bus through the most ancient bit of London, go along the High Walk, and get a table upstairs inside.

Because that’s the other good thing: as well as everything else that goes on there, it’s a public space. The WIFI’s free, it’s open all the time, and you can spend as long as you want writing or reading without having to guiltily avoid buying another cup of tea.

And say what you want about its looming stance and massive towers, that makes it a very good bit of London for me.