It was at some point between me taking a seat next to my best friend’s dad and sister, and the three of us embarking on a vocal warm-up involving a song entitled “Everyone has AIDS” that the thought occurred to me: this probably isn’t going to be your average Saturday night out.

But then that’s probably because The Prince Charles isn’t your average cinema. 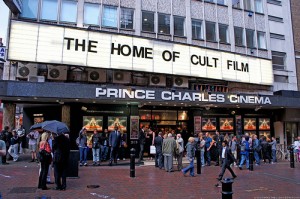 Firstly, the Prince Charles is entirely independent, which basically means it won’t remove the best part of £20 from your wallet before subjecting you to one of Michael Bay‘s box office blowing brain farts.

And if such a film does appear in the schedule, you can be assured that they – and the hoards of people yelling insults at the screen while it’s on – are doing so with absolute irony.

Secondly, the Prince Charles caters for people who like films in the same way that Nestlé caters for ADD children who like E-numbers: with absolute, passionate, hand-rubbing glee.

This means that before your Team America Swear Along begins, you are given a book containing all the words to the songs. It means that each page is carefully numbered alá “Page fucking 5”, and that instead of adverts, the film is preceded by suitably drunk audience members being brought up on stage to re-enact their own births in exchange for DVDs (alright, so you probably had to be there for that one).

And once you’ve watched, sworn, sang and had a right old giggle, it’s the sort of place where you can buy a membership for a tenner and reasonably expect (or request) to see anything from 1984’s Ghostbusters to 2012’s The Muppets.

It is, hands down, my favourite way to spend a Sunday afternoon and a glimmering gem in the steaming tourist-filled cesspit that is Leicester Square.

So if you’re stuck for things to do in the West End and have a spare £7.50 (£4 during the day for members), then have a gander.

It’s not your average place, but then again, that’s just the way this Londoner likes it.