There are all sorts of “nice ideas” floating about in London.

Harrods food hall is a nice idea – but it’s always packed and smells pungently of the wrong sort of cheese. Oxford Street is a nice idea, until you get there and want to leave.

Most of the places you hear about – new restaurants, bars, clubs, pop-ups, fancy attractions- are nice ideas in the same way that stroking a tiger is a nice idea (lovely, cuddly, fluffy thing) but you’re not about to stump up the air fare to the forests of Asia to find out. And besides, you could see one in London Zoo. But you probably won’t, because it’s too expensive.

Which was sort of my reaction when I heard about this newfangled ping pong bar in Holborn, Bounce, which is done by the same people who charge £8.95 per person to roll a ball along the floor in Bloomsbury and Brick Lane. The concept screamed nice idea right up until the bottom of the press release, where it said:

Now, bear in mind that at the time, there were three perfectly functional free ping pong tables scattered around in Embankment Gardens and various other public spaces in London.

This, coupled with a can of Strongbow would, I supposed, produce much the same effect as paying £26 to do it for an hour in a bar in Holborn.

Because just think about that for a second. Twenty-six Great British Pounds for an hour of ping pong. 60 minutes of whiff whaff. 3600 seconds of table tennis.

Not being funny, but that’s a ticket to Alton Towers.

So naturally, I held off on visiting this particular nice idea.

Until it was someone’s birthday… and they paid. 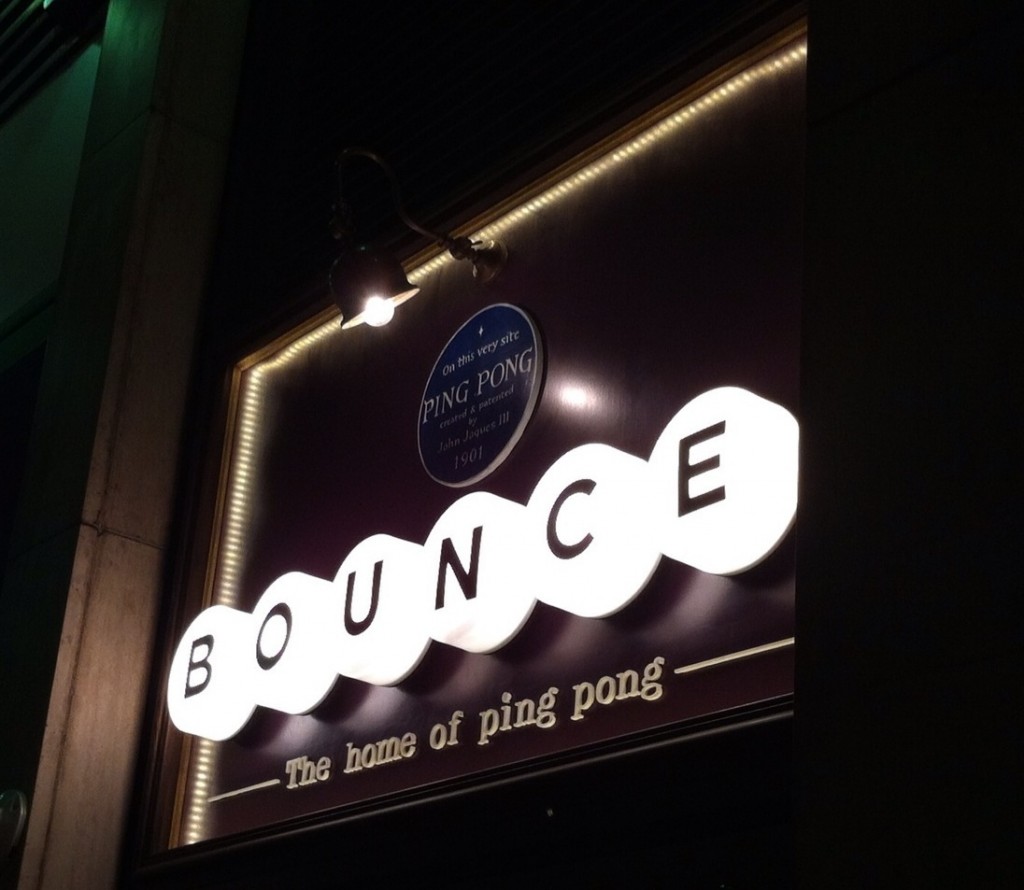 We went after work on a Friday night – which meant most of us in the group were already drunk on relief by the time we got there – and proceeded to consume more wine than you’d generally advise people to drink if you then plan on giving them a bat and bucket of incredibly light, whackable balls.

Because despite my misgivings, Bounce was really good fun.

In fact, you cannot know true joy until you’ve stood in a busy bar and hit a small, white, relatively harmless ball to the other side of the room and watched it ping effortlessly and painlessly off the back of a stranger’s head.

“Sorrrrry!” I’d yell in futile apology, like the owner of a puppy that just started devouring someone’s picnic, “it just got away from me!”, before firing another in the opposite direction.

That’s not to say I wasn’t a serious contender on the table, because we all showed some serious skills in that department, but hitting ping pong balls in a bar turned out to be a nice idea both in theory and practice.

On which note, if anyone wants to pay for me to go again, you’re more than welcome.