When you arrive in London, either by birth or because you got the train down from Yorkshire, you are automatically assigned a side.

And then you must get to know it, and stick up for it in fights.

If you’ve done it right, everywhere else – even going just three stops further west on the Overground – should leave you feeling a little bit stranded.

And going 40 minutes away into the opposite end of London should render you pretty much an out-of-towner… in your own town.

Londoners get very protective of their areas, their stomping grounds.

It’s not unusual to hear people get all defensive when their neck of the woods is badmouthed in passing conversation or constantly bored off by cliches in Time Out.

The north / south divide in particular is something even the vikings fought over* in 1066**.

You only have to go into a pub on the wrong side of the Thames and mutter the words “but where are your underground stations, south London? Where indeed!***“ for things to get nasty and kick off.

Because ultimately, where you live, eat, drink and drag yourself out for a reluctant walk also says a lot about you, and everyone’s got their reasons for choosing their bit.

Someone’s got to live in Clapham, after all.

But the happy flipside to all this inner London patriotism is that venturing into someone else’s area means you’ve also got a ready made tour guide: you can bet they’ll take a certain pride in showing you around.

*Not a fact
**something happened then but probably not this
***Actual true fact: out of 287 tube stations, only 29 are in south London.

For example, last weekend I went to Honor Oak and Peckham.

Whenever I go to south London, my mate Tom tries to convince me to move there.

There are many tactics him and his girlfriend employ, such as feeding me copious amounts of rum and having speakers in their bathroom, but this time he was also like “I know, let’s walk to the house party via that massive hill” and pointed at what was basically a small mountain.

He said this was because it would be quicker than going around it, but when we got to the top, there “just so happened” to be a conveniently lovely view over the whole city of London.

And oh, I love a good view.

Then naturally, when I was hungry after all the walking, we “just happened” to stumble upon Sodo, where I ate the most marvellously excellent pizza served by the most polite, chatty, excellent waiters I’ve ever come across in London.

It was almost enough to make me change my mind about south London, but then I discovered there’s also a Sodo in Clapton, so thankfully there’s no need.

Phew. And off I went back to Dalston.

Likewise, to be shown around someone else’s area of London is to find out a little bit more about them.

In a city where chain restaurants and shops are rivalled by an equal, if not greater number of brilliant independent places, exactly where a Londoner chooses to take you can be enlightening.

“I want to show you the best shop in the world” I recently declared, because when someone comes to London, you want them to see its very, very best bits.

Which is why we spent the next five minutes pointing through metal-grilled windows at a startling array of bears, birds, zebras and giraffes.

Because if you really want to impress someone and show off your local area, you take them to Get Stuffed, the taxidermy shop on Essex Road. 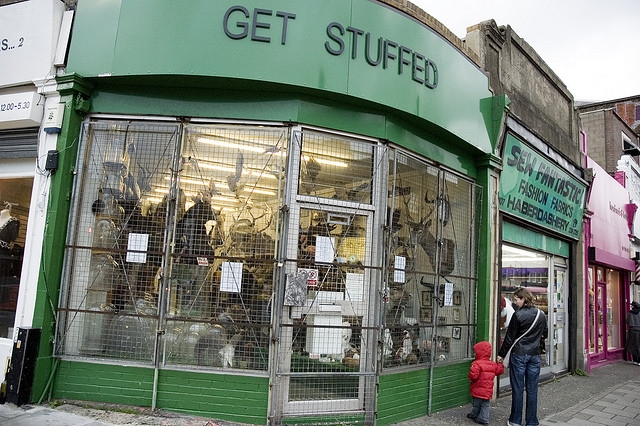 I’m not quite sure what it says about me that I’d insist on showing someone a shop which is essentially full of dead animals, but there you go.

We’ve all got our little bits of London, the little things that make us like where we live.

And this little bit of north east, with its silly shops and its excellent pubs and the number 38 bus, is mine. What’s yours?