I went to Secret Cinema the other week.

You’ve probably heard of them from all the BBC News coverage this summer.

They recreated the set from Back to the Future next to the Olympic Park in Hackney, charged £53 a ticket and then cancelled the first few shows, ruining lives and wasting thousands of 1950s fancy dress outfits in the process.

All over the UK, upset BTTF fans wept tears of anguish onto their Facebook page, while everyone on Twitter made fun of them using pithy puns and clever film references.

We should also congratulate those who took the much more original route of mocking people who live in Hackney.

Alas, I was just a casual bystander.

After attending a brilliant (but slightly pricey) screening of The Third Man back in 2012, I filed Secret Cinema under Things I’d Definitely Do Again – If It Was Free.

This made me immune to the hype, ticket scrum and exhalations of joy that occur whenever people you know attend an event that costs them £53, and you don’t.

Because here’s the thing: Secret Cinema is excellent. It’s very well done, it’s fun, it’s an experience to bore people with for at least two days afterwards – but £53? Yowch. They’ve lost me. I’m out.

Which this time, unexpectedly, it was. I took the ticket in return for my BLOGGING SOUL, which as we’ve established before, is occasionally a fair exchange.

Actually, it was probably free in return for me saying “oh hey look East Village sponsored the whole thing and they’re located next door to the Olympic Park”, but I can handle that.

**Please note: East Village apartments are not free (I asked)** 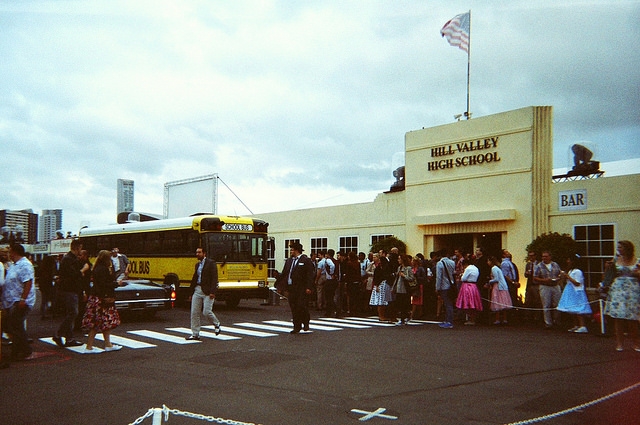 Aside from not having to pay to get in, avoiding Opening Night Cancellation Trauma, and also seeing the film and all its fancy pants live scenes played out around us – which was well good – there was one other really amazing feature of Secret Cinema’s Back to the Future screening:

The removal of mobile phones.

Lie back for a minute, and try to recall the last time a group of people watched TV without picking up their phone mid way through the programme.

Now – and this one’s tricky – envisage a world where you walk past something brilliant or unusual on the street, and everyone’s just smiling and going “oh cool, look at that” or “can’t believe I’m here!”, and not taking photos with their massive faces plonked front of it. 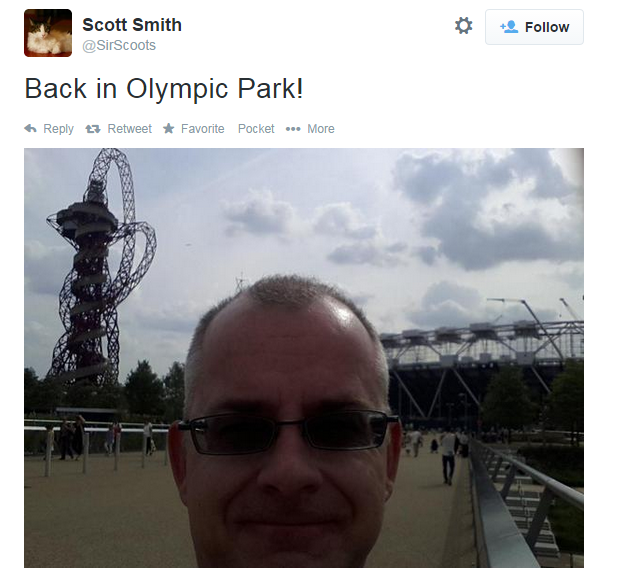 The face, the face. Why so much face?

But this, my friends, is precisely the world that Secret Cinema created under the glare of the Westfield branch of John Lewis.

At first I was a bit skeptical about their motives, because once inside, mobile phone firmly off and away, staff were selling disposable cameras for £6 a pop.

“Oh, come on. At £53 a ticket, they could at least give these away for free.” I proclaimed loudly, as my kind sponsor paid the man and gave me one for free. 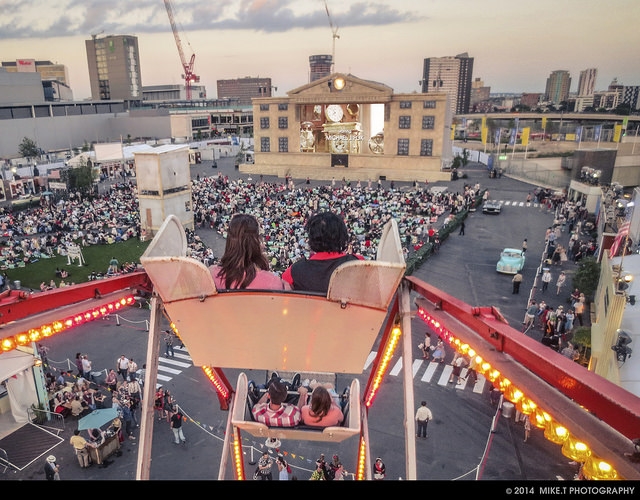 But the best was yet to come.

I soon realised why Secret Cinema didn’t give them away for free. Why would you?

They’d realised that in the age of our click-happy hands and 16GB memory cards, disposable cameras were a veritable goldmine.

You see, everyone continued to use their disposable cameras in the same way as their iPhones; snapping ten or fifteen photographs of the same moment in quick succession.

(Granted, winding it on between each shot did slow the pace).

It was a bit strange to watch; this instance of old technology meeting newly wired brains, and it undoubtedly made old Secret Cinema a nice bit of extra cash as people quickly ran out of film.

But it had another benefit.

When the sun set and the film came on, and cars were racing round and things started exploding – everyone just kind of…took it all in.

You know, with their eyes and minds.

Some couldn’t resist a sneaky video – like the girls next to us – but then other cinema goers actually told them off. It was great.

So Secret Cinema might not be perfect, it might charge slightly too much for tickets, but it also puts on a brilliant night and does lots of things really well.

And making people put their stupid phones down for a few hours was definitely one of them.

These photos aren’t mine because my disposable camera isn’t developed yet. So thanks to Bex Walton & Mike T via Flickr for the images. Also Hollie for being the KING and sorting all this out.