There are 567,087 music events happening every night in London.

That’s complete bollocks, obviously, but the fact remains: after Staying a Bit Late at Work Because You’re So Busy (isn’t everyone so busy these days?) and negotiating the Tube Strike Which Is Going to Really Bugger Up Commuting for the Next Two Weeks, most of us are too knackered to attend any of them.

Are we busy though? Are we? Really? Because personally, busy for me could mean working through lunch, or it could also be time allocated for watching True Detective in bed on a Sunday – so, swings and roundabouts you might say.

Anyway, in an attempt to win the War Against Being Busy, I’ve decided to go to one music-y / gig thing (am I cool enough to say “gig”?) per month. Aim low, and all that.

Nothing in January. Nothing in February. March was the Broken Bells at Shepherds Bush Empire, so that was good, and now here we are in April when – SUCCESS! – another gig was got.

Last night me and Harriet went to one of a series of “music + technology” nights called Convergence. This one was at St. John’s Church in Hackney which, as the name might suggest, is a church. In Hackney. 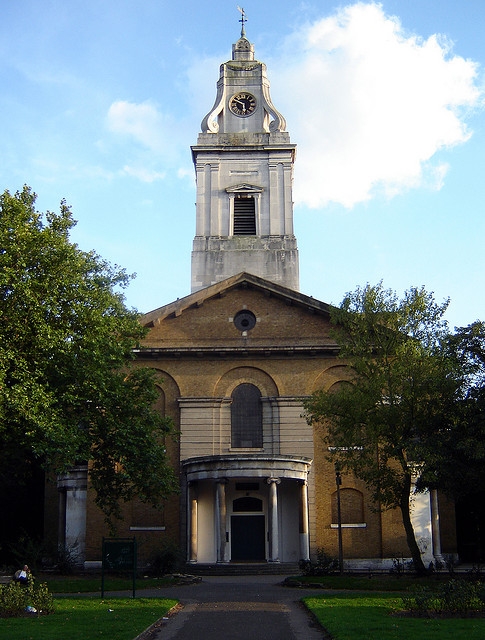 This isn’t just any church though. No, no.

It looks like a normal church, doesn’t it? All religious and clock-wielding, all those concrete pillars and crosses and stuff – there are even normal church-like pews inside and everything.

But if you think this is just your bog standard church, I’m afraid you’re very, very wrong.

You missed the clue, guys – it’s in Hackney.

Therefore in Time Out’s eyes, this can never just be a church.

No. It must be a Hipster Church. 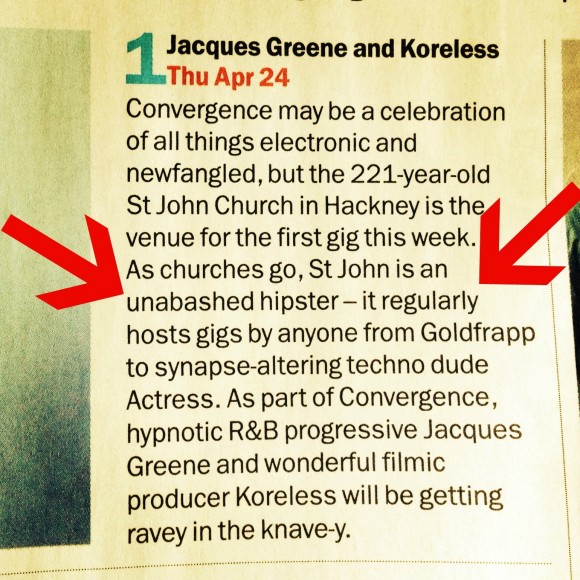 So off we went to East London’s Premiere 221-year-old Hipster Church™ for a Hackney Hipster Gig™ full of Hackney Hipster People™ who are really just people with age on their side who like music, but hey, don’t let that stop you painting an entire swathe of society with a lazy moniker.

Tell you what though, that Hackney Hipster Church™ was pretty good.

They’d cleared the pews away and shoved all the Hipster Hymn™ books into a cupboard – apart from the one that Hipster Harriet™ realised she’d been standing on the whole way through at the end – and we watched Vaghe Stelle, Koreless and Jacques Greene do their thing while the speakers, screen, lights and lasers did theirs. 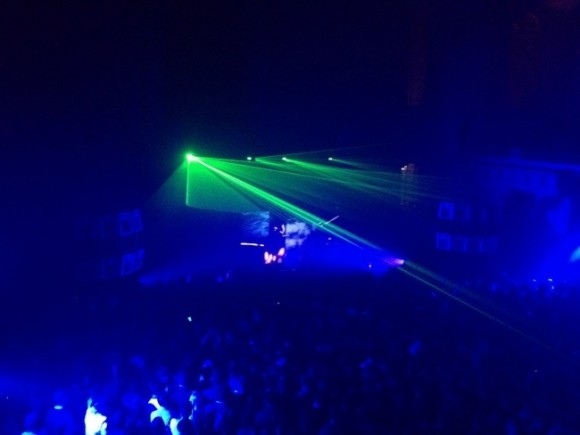 It was most enjoyable.

I know it’s difficult for you to tell how good it was because I failed to capture every moment on camera, and that’s how you can usually see whether someone had a good time or not.

Unfortunately I didn’t take any videos either so you won’t know how it sounded; you’ll just have to make do with me saying that if you like loud music and lasers and basslines and beats and stuff, you’d probably have liked this.

I’m assured that everyone else in the Hackney Hipster Church™ was having a good time too.

How do I know? Because of the attendee to iPhone Screen Glow ratio: look! Not a Facebook update in sight. Anyone would think it was 1992 down there or something: 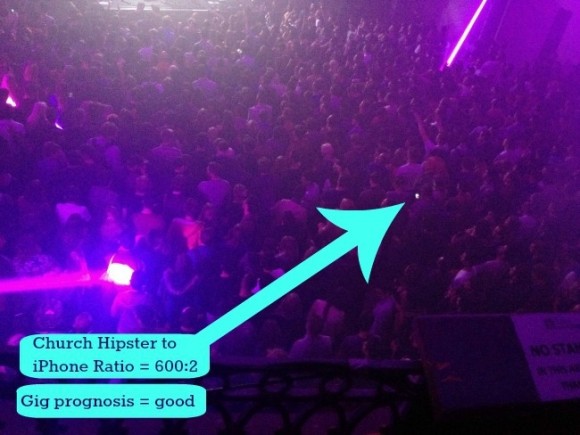 So there we go.

April’s music-y thing all wrapped up in a brilliantly different kind of venue. Thanks Koreless and Jacques Greene for the right little ear-treat, and Hackney’s St John Church for being Hipster enough to venture away from hymns and into electronic music. If this sort of thing is your bag, then there’s still more Convergence stuff you can catch this weekend.

I’m currently missing a Music Thing for May, so currently my next stop is Field Day in June.

If you know of anything happening in May that I can shuffle along to, then give me a shout. (Hipster credentials optional).