It is officially “park weather”.

Park Weather is when London pretends to be summer for like a day.

Park Weather means you leave the house even though it’s your official day of rest, only to find yourself sporadically whipped by gusts of wind that leave you shivering on the grass, wrapped in your portable tartan picnic blanket, looking longingly at the part of sky where the sun used to be because your bedroom window lied and it’s still absolutely bloody freezing.

All it takes is one hint of sunshine and we’re out.

Lining the aisles of Tesco Metro clutching cans of gin-in-a-tin and a pack of Pringles, frantically yelling “SUN’S OUT, LET’S GO TO THE PARK, ASSEMBLE, ASSEMBLE” into our phones and wondering whether to wear a waterproof coat over all our ambitiously summer-like clothing.

And so I found myself on a bench in Regent’s Park at the weekend, dropping location pins into a Whatsapp chat and awaiting the arrival of my mates Em (human) and Buster (dog), a bag of tubular supplies at my feet and the wind…

It was while I was considering the true meaning of the acronym BST when my phone rang, and a voice said:

“Hey so I’m near where you are, but have just stumbled upon what appears to be a French Bulldog convention, and there’s about 50 dogs and their owners just standing about having a chat. Want to meet here instead?”

…to which I replied “What yes where?” and within minutes, my Regent’s “Park Weather” Day Out had begun in the best way possible.

With loads of French Bulldogs having a massive bulldog party.

That’s right my friends, London’s population of Frenchies had gathered for their monthly en mass walk in Regent’s Park.

There were loads of them. All in one place. 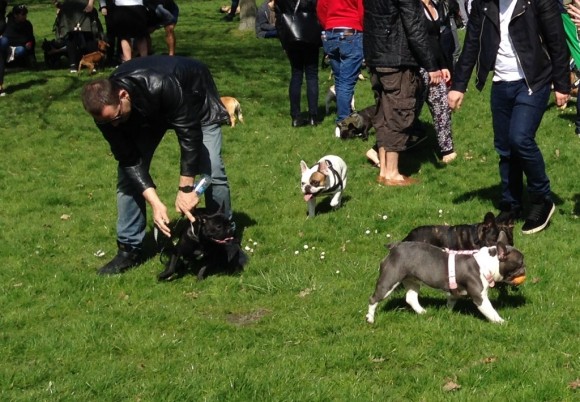 Obviously, at the time we didn’t know it was a regular monthly thing.

To us it was just a huge, random gathering of exactly the same sort of dog, like a magical dream, so we just sort of stood around watching them for a while, a bit baffled, not really knowing what was going on and saying things like 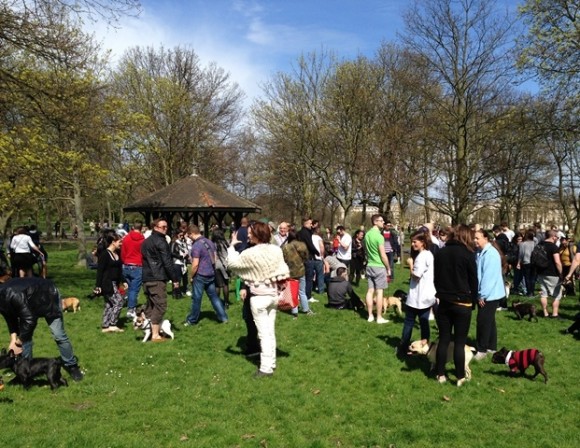 Eventually we dragged ourselves away from the bulldogs.

There were other things vying for my attention, such as the fact that Regent’s Park also seemed to be attracting a lot of people with wheels for feet.

I’m not sure when it became ok to rollerblade again in public, but I saw one person doing it in Old Street the other day and then this, so it’s safe to say after years in 90s exile, wheelyfeeting around the place is quite possibly “back”.

I wasn’t sure how to feel about this turn of events, but to be fair, at the time I was preoccupied with how the conversation went before this couple left the house that day.

Another thing I noticed was some fairly ambiguous topiary.

I’m assuming it’s someone’s job to be the Royal Parks Custodian of Foliage, which means someone is responsible for the fine feat of bushy engineering below. 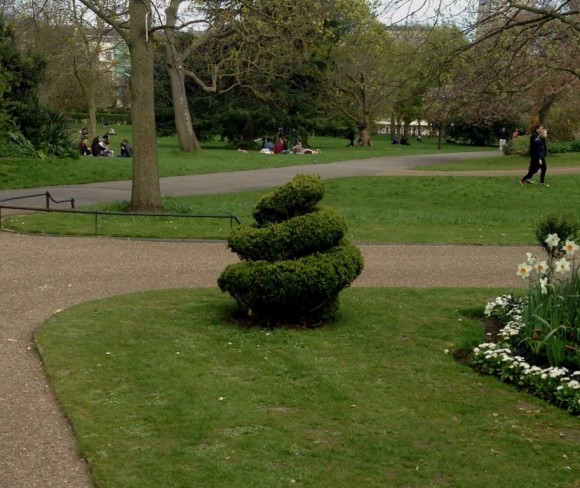 But then came the surest sign of all that London Park Weather was in session.

A moment’s revered silence please, while we all stand back and commend this man for his choice of trousers. 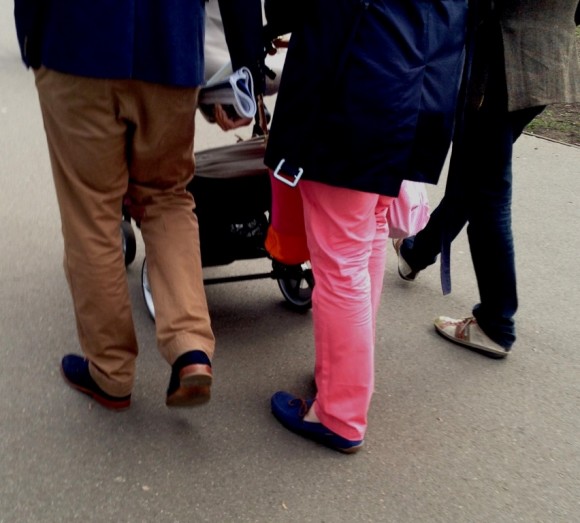 Oh, Park Weather. We love you. Welcome back.

Long may you continue, all the way until at least 6pm tomorrow.