Every year, me and my friends go to Somerset House for the Film4 Summer Screen.

The first time we went, it rained – hard – but amazingly, despite our soggy bottoms we went on to have one of the best nights of the year. If you’re lucky it’ll be one of those lovely summer evenings, but even if it’s not, you’ll have a lovely time. Providing you’ve got the right stuff.

So to help the masses, here’s everything a slightly OCD Virgo (a.k.a. me) would would want to know before going to a Somerset House film screening for the first time (and if it’s looking like rain, go here). 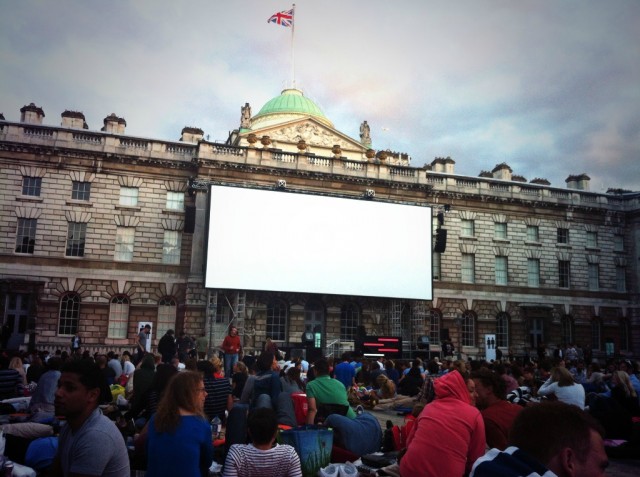 If you’re in a group (or solo and want to starfish), get there when the doors open at half six. After seven you’ll have a hard job finding a big space but might be able to squeeze in, and any later than that you’re going to struggle. My advice? Go down around 6.30pm, claim your patch, and settle in for the long haul. Then throw mad evils at anyone who impinges on your territory. Like the girls next to us did. Mehhhh.

The film won’t start until 9pm, so bring supplies. Order yourself a takeaway from Pizza Express next door, or Pizza Hut further towards Charing Cross station if you’re a massive dirtbag. Just don’t get salad. Film or no film, no one needs that in their lives.

3. Basically, just bring your own food

There is food inside Somerset House, but it’s a bit on the pricey side. Same goes for the booze. On which note:

No glass is allowed, so go for a two litre cocktail of fun. One small bottle of vodka decanted into a big plastic bottle, with 1.5 litres of tonic = a party. If it’s cold, flask it up with some Irish coffee. There’s a Tesco on the corner of Waterloo Bridge if you need to grab supplies (plastic cups all the way), or else you could always just go nuts on the free shots of Bordeaux wine inside. No one’ll notice.

5. Don’t scrimp on the fluffy blankets

Even if it’s 20+ degrees: the blankets. Bring the blankets. You’ll want one to sit on, and one big fluffy fleecy number to wrap yourself in from about half an hour into the film. Better yet, bring a sleeping bag. Trust me. They’re perfect.

6. Don’t be stingy on the pillow front

Bring two: one big enough to prop your head up so you can lie down, and one for your bum. Oh, and that’s one each. Sharing’s not caring, folks, it’s just blummin’ uncomfortable.

7. Go with a boyfriend / teddy bear / friends you don’t mind spooning with

Look, this is one of the best nights you’re going to have all summer. Mark my words, when the temperature drops a few degrees and you’ve quaffed twenty of those freebie wine shots, you’re going to be feeling the love. So while the couples do their disgusting snuggling, all you singles (hollaaaa) will want to be stationed next to someone you can share the spoony warmth with. Cosy up, folks.

Even though it’s outdoors and open air, all you smokers are banished to the outskirts. You’ll be demoted to the back corners of the courtyard if you want to have a puff, so it’s probably time to whip out the electric versions if you don’t want get up mid-film.

9. If someone gives you their spare tickets for free, at least offer to buy them a drink

This one goes out to the couple standing outside who were gifted two of our spare tickets at the last minute. A cider would be, lovely, thanks! Oh…wait…no. lolz! You didn’t ask.

You’re at one of the best evenings in London all summer. It’s sold out. Sit back, relax and try not to go to the loo during the good bits.

You’re going to have a very nice time indeed.

Are you going to a Film4 screening this year?