Whenever people blog about stuff they received for free, their posts always seem to start with something like this:

“I’ve always been really interested in amphibious modes of transport. So when the Huge Cruise Company asked if I’d like an all expenses paid trip on their luxury liner to an exotic island somewhere really sunny, I jumped at the chance to check out the construction of the ship for my readers.”

For some reason, no one says “Look guys, I just fancied a freebie so bear with me on this”, instead they waffle on about doing it for their readers, or having a real affinity with the brand.

It’s high time we stopped pretending and admitted that occasionally, we all just want something for free so we can brag to our mates and make them wish they spent a large proportion of their time writing a blog about London instead of going out on a Friday night.

…when the Cavendish Hotel in Mayfair asked me if I’d like to come for an overnight stay and dinner round their gaff, I was all YES, YES, ABSOLUTELY, YES, YES, WHEN? despite secretly having the following reservations:

Luckily for me, the reception staff at the Cavendish had already anticipated this moral dilemma, and promptly solved it by uttering the following words upon check-in:

Your executive king room has been upgraded to a junior suite. It’s on a private floor, so you’ll have to take the lift to the 14th and follow the stairs to the penthouse suites. Would you like any help with your bags?

And with the magic words “upgrade”, “suite” and “penthouse” firmly in the bag: that, as they say, solved that.

So off we went to the top floor and into the Berkeley Suite, where, it could be said, the views over London weren’t half bad.

The room itself had everything a Dalston native could want from their first London hotel stay:

It also had a surplus chaise lounge which, my date remarked, “doesn’t really fit with the colour scheme of the room”, but it’s fair to say that by this point, all we wanted was an excuse to call reception using the phone next to the loo.

So with dinner not booked until 9pm, we nipped off to the Three Crowns pub round the corner for drinks and a bowl of olives which looked and tasted suspiciously like wasabi peas.

I later found out they were, indeed, wasabi peas.

The pub was home to a few bewildered looking tourists and the friendliest bar staff you’ll find any side of Whisky Mist, one of whom spent a lot of time singing along to Adele songs in an Eastern European accent.  All in all, I agreed with this reviewer who said the Three Crowns is quiet, but

a nice place to spend an hour escaping from the horrors of the West End.

In short, by the time 9pm and dinner rolled around, we were wasted.

We were a bit tipsy though, so after returning to the hotel and getting directions to the Petrichor restaurant on the first floor, we were well up for getting stuck in to our dinner.

I called shotgun on the best starter and main (quail eggs with brioche soldiers, then a chicken and bacon roulade), which meant my date – who suffers from an aversion to ordering the same thing as someone else – opted for a fish combo of scallops and trout.

While I was just pleased to find out that scallops actually existed in real life, not just on Masterchef, my date was busy panicking about the upcoming trout. Because that’s what happens when you panic-order pink fish, when you don’t really like pink fish.

Bellies full, cheese board consumed, wine devoured, signature scrawled – we retired to the 15th floor, where London was lit up below us and looking spectacular.

Unfortunately I forgot to take a photo of it, so here’s one of me feeding a dog some Monster Munch at a party a few weeks ago instead. 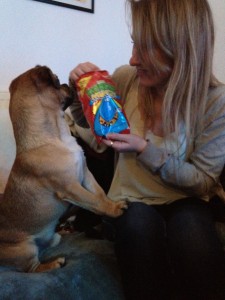 Thankfully, the Cavendish doesn’t chuck you out until 12pm at the weekends, so in the morning there was plenty of time to have an extended nap and miss breakfast before checking out.

All in all, I would highly recommend the Cavendish Hotel. The staff are lovely and polite. The food is good. The suites have lovely views. The complimentary water is brilliant for a hangover. You’ll find it tucked behind Fortnum and Mason at 81 Jermyn St  St James’s, London SW1Y 6JF.

At this point I’d like to wrap things up by saying how interested I am in feng shui and room design, and stress how much I really, really like four star hotels.