Last month, while in between flat shares, I moved back to my parents’ house in Pinner.

No one usually knows where that is, so for the initiated, Pinner is basically a small village in Zone 5 on the Metropolitan line, marked below for ease of reference with a large black arrow. 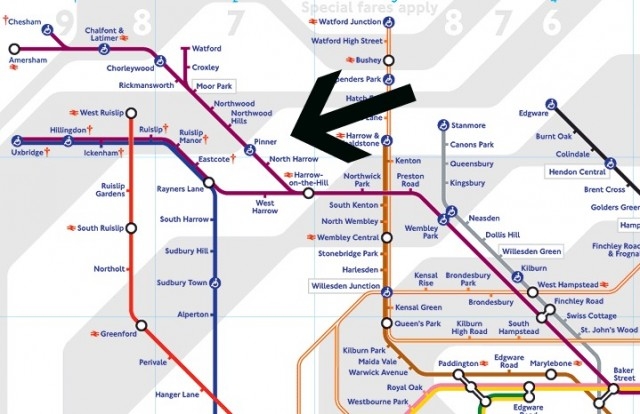 It also has Zones 6, 7, 8 and 9, although there’s no evidence that these actually exist in real life.

In fact, these Zones may as well just be part of a forgotten realm on the Crystal Maze circa 1994 for all the rest of London knows about them.

A journey into central London from Pinner usually takes about 5,387,234,632 hours to complete.

At one end, you’ve got Aldgate in the City of London and at the other, whimsical, Never Never Land-sounding places like “Chesham”, “Amersham” and “Chorleywood” in and around Zones 7, 8, and 9.

So, just to reiterate:

Most people who live in Pinner commute into central London for work.

This was what I did back in 2002 BT (Before Twitter), when my work mostly consisted of temporary secretarial jobs.

In these roles, my main function was to provide administrative support including, but not limited to:

As a result, commuting was often the most interesting part of my day.

And over time, going back and forth between Pinner and Baker Street, I learnt that the Metropolitan line is different from most other routes into London, with its own quirks, rules and idiosyncrasies. 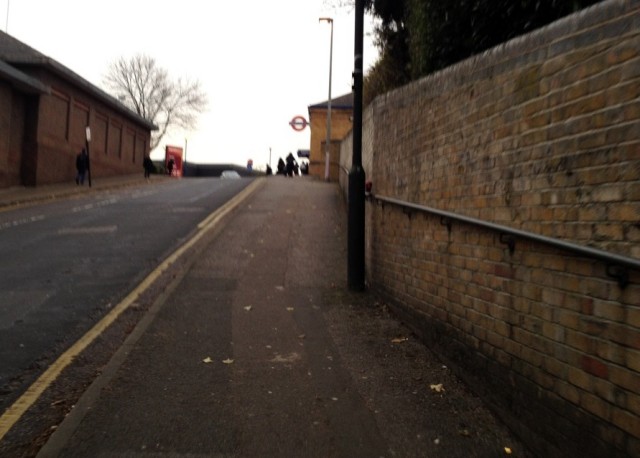 For example, Pinner Station is at the top of a steep incline.

As a result, most commuters begin their day with an up-hill sprint, which starts when they see their train coming over the bridge and ends in frustration as they get to the barriers only to realise, breathless and sweating, that they’ve got no money on their Oyster card.

Repeated slaps of plastic against reader are often followed by cries of “No! Wait! No! No, oh, bugger” as the train slowly departs in front of their very eyes.

They have every reason to be upset, because this is Zone 5. The next train won’t be along for…oh, who knows? 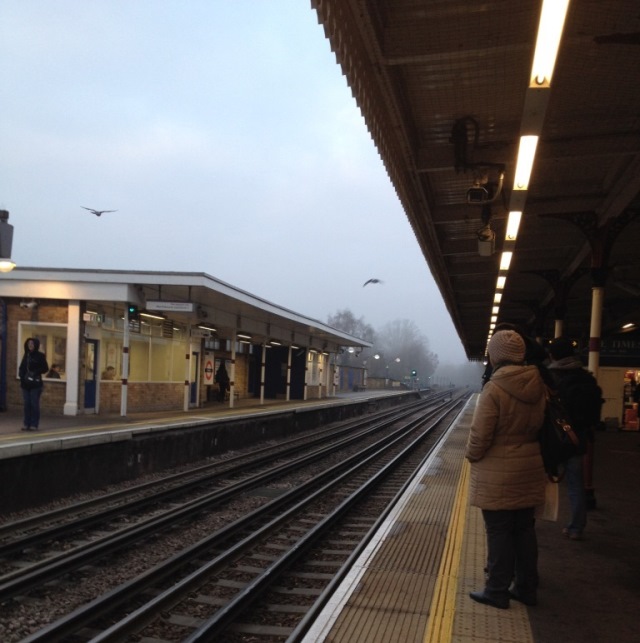 Have you seen the Samuel Beckett play called Waiting for Godot?

It’s about these two blokes who just sit and chat while they wait for someone called Godot, but it’s pointless because they don’t know when he’ll arrive.

Waiting for the Metropolitan train at this end of the line is a bit like that, except without the talking.

People just stand in the same place every day (the exact spot where the doors will open, because this is the stuff commuters know) staring up the tracks, waiting for two lights to appear around the corner.

An empty crisp packet rolls across the rails.

From this, we can safely conclude that Samuel Beckett’s famous play was probably based on his experiences of waiting for a Metropolitan line train. 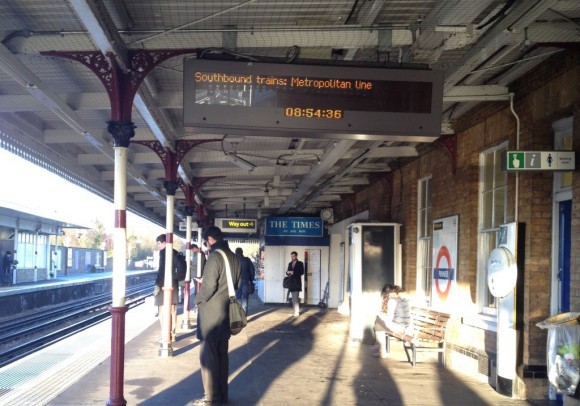 So rather than being told when the train is going to arrive, you are instead provided with ways to pass this unknown quantity of time instead, such as solving as the impossible maze puzzle which just appeared on the wall one day (below, left), which is either:

c) a cruel metaphor for the journey you are about to begin.

Again, no one really knows. 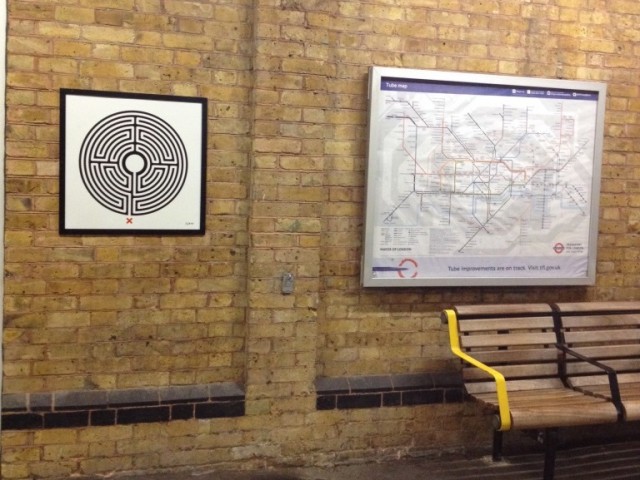 When the train finally does pull into the station, there’s always a race for a seat.

You might think that suburban life allows for a more relaxed “no, after you” approach to getting on a train, but then you’d be very, very wrong.

On the Metropolitan Line before 8:30am, where not bagging a seat means standing for a whole 5,387,234,632 hours and not getting on at all means waiting until Godot knows when on a freezing cold platform with only maze puzzles for company, things can get prett-ty fighty on the Semi Fast to Aldgate. 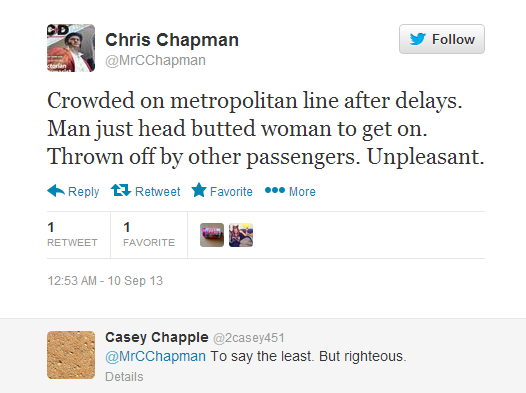 But here’s some advice.

If you don’t get a seat – and you won’t because Metropolitan line commuters are like Robocop in their determination to GET THE SEAT, MUST GET THE SEAT, STARE STRAIGHT AHEAD, DON’T CARE IF YOU’VE GOT CRUTCHES, SEAT IS MINE, SEAT ACQUIRED, POWER DOWN – you’ll have to make do with other options.

So, those in-the-know tend to aim for the bit between the seats. 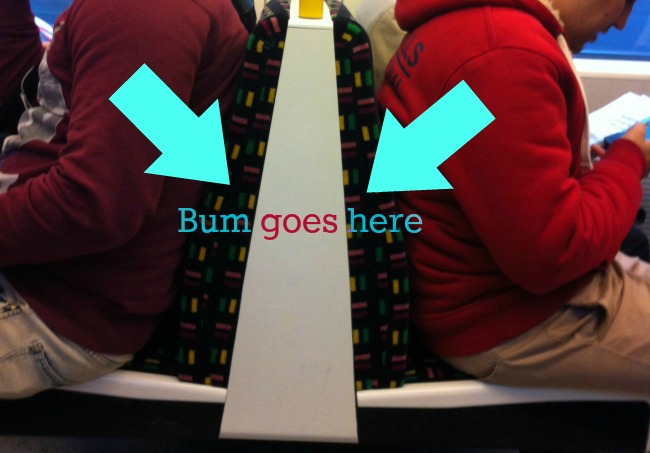 Or, they go for the wobbly bit between carriages.

Not only is this bit fairly comfortable as a resting post, but – and this one’s for you, Pilates fans – it’s also quite a good way to maintain core strength. 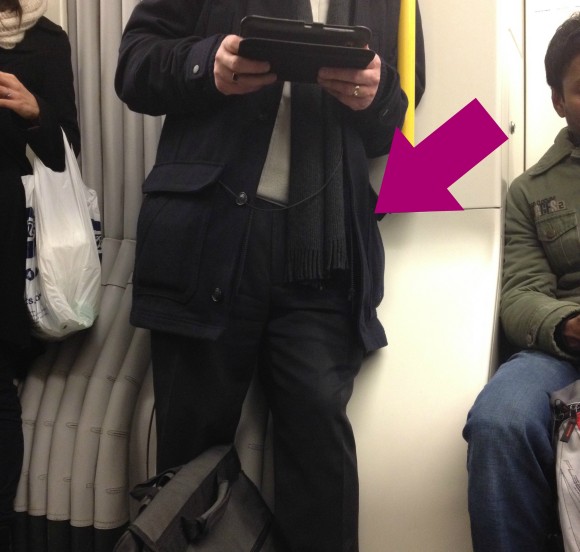 After a day at work, there’s more fun to be had on the way home.

Because for some reason on the Metropolitan line in the evening, everyone has this strange compulsion to stand up prematurely when leaving the train, like “Ooh, I’m getting off at Pinner in 3 minutes. Better get into position.”

So instead of remaining seated until, you know, they can actually get off, commuters instead start queuing up from the second the train leaves North Harrow, taking their position by the doors.

First one person makes the move. Then a sort of competitive edge takes over the entire carriage and before you know it, five, six, eight, ten people are waiting in front of this prime disembarking spot, despite having a good long while until the doors actually open.

But that’s not all. 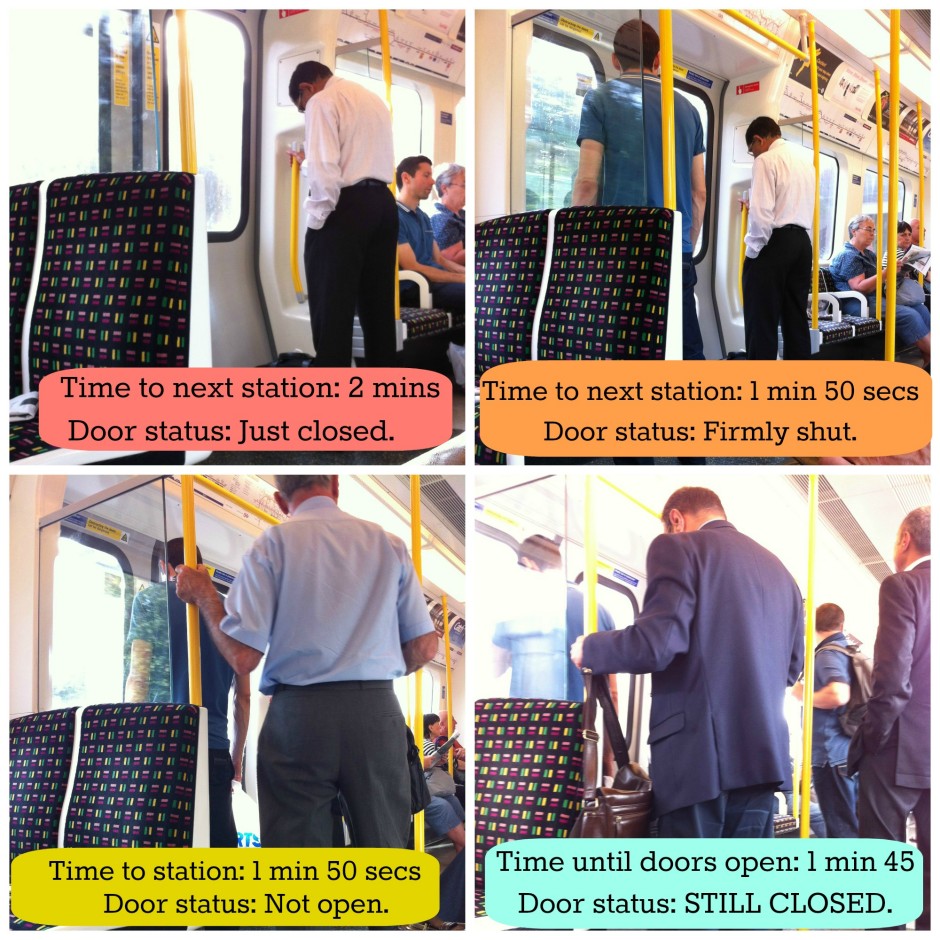 These keen beans then launch themselves out the second the doors open and proceed to sprint.

Off they go up the stairs like suited greyhounds, over the tracks to the ticket barriers, cheered on by a loud, involuntary cry of “RUN, FOREST, RUN” (ok, this only happened once).

You could argue they’re running to “beat the queue at the barriers” or “get to the car park pay machine first” but then there’s never really a queue for the exit barriers at Pinner, and does any of this exertion actually save you more than about 30 seconds of time if you then have to stop and fumble for your Oyster card anyway?

But I do know that after a while of wondering what the hell, why is everyone getting up so soon and what’s with all the running, you too will be overtaken by this compulsion to get up and race off the train, without every really understanding why. 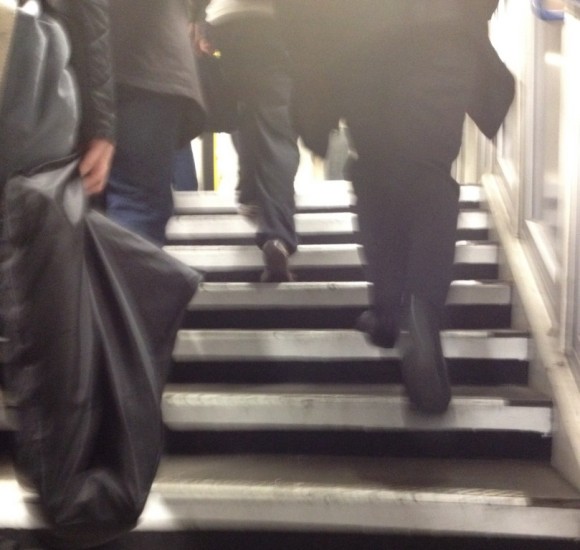 Hopefully this answers a few questions that will inevitably pop up next time you’re commuting on the Metropolitan line from Pinner, and you’ll be able to sit back, relax and enjoy your journey safe in the knowledge that this is just how Zone 5 rolls.

At least until you hear those golden words “This train will be terminating at Harrow-on-the-Hill” anyway – but that’s another story.

Use the Met line? Commute on it? Do you race off the train every day?