In London, a city with infinite possibilities and over 8,174,100 people, it’s strange how easily most of us content ourselves with waking up at the same time each morning, brushing against the same people on the bus or tube to work, and following the same routine until the weekend, when – if we’re lucky – we’ve got two days* to mix it up a bit.

(*less than that if, like me, you tend to spend your weekends in bed, watching Mad Men and writing to-do lists full of things you’ve already done so you can cross them off and feel productive. It’s just easier that way)

But by my estimation, there’s probably a 4-5 hour window after work that most of us aren’t making the most of.

What if – instead of going to the pub, or straight home to watch University Challenge – you went somewhere new for a change? Somewhere you could go alone or with mates, stuff your face, have some good wine, get to know a load of new people outside your social circle, and still be in bed asleep before 11pm?

And where does such a place exist?

I’m guessing that’s probably what Peter Mandeno thought when he came up with Wok+Wine, an event I found myself at a couple of weeks ago after getting a heads up from a friend that began…

ladies, I can’t go to this but I have heard GREAT things about it

The concept of Wok+Wine is simple: get 40 people in an unusual space, serve up 40 bottles of wine, put 40 pounds of shrimp on a table throughout the course of an evening, and see what happens.

There are no chairs, no formalities; no plates, knives or forks. There are also, I expect, no OCD sufferers or people allergic to prawns – it’s probably safer that way.

And despite the name, the point of the night isn’t actually the Wok or the Wine – but the people you meet when you’re consuming them.

Peter’s friend-making concept has travelled all around the world from New York to New Zealand helping locals in different cities get to know other like-minded folk, who then tell their friends and spread the word; an approach which means you’re a lot more likely to find common ground with the people you’re talking to. 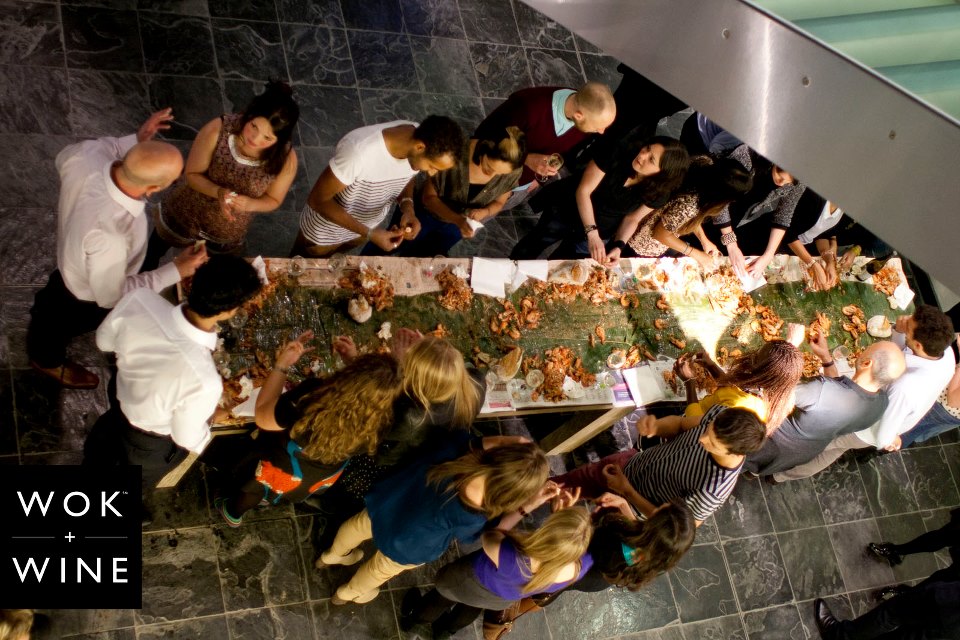 I didn’t know quite what to expect before rocking up at Club.Workspace Kennington with a colleague and an old friend from uni. But after a warm welcome and a glass of wine (the first of many), the three of us soon split off into different conversations, before delving into a communal pile of expertly flavoured giant shrimp that was poured along the length of a table.

Which leads me to the next point about Wok+Wine: it’s about getting a bit messy. Literally. This is communal eating for people who don’t mind getting their hands dirty – although granted, the introductory handshakes reduced significantly after the food came out.

In fact, it’s the perfect choice of food and drink: picky prawns with their heads on, the removal of which requires a bit of a tutorial from Peter beforehand. The food’s a talking point without stealing the limelight; it provides all the “how do you eat yours”  and “Ooh, want a top up?” you need to start off a conversation.

As a result, you find yourself chatting away to the sort of people who aren’t at all phased when the stranger they just started talking to accidentally flings a rogue prawn in their direction.

In short, that’s me, and that’s my sort of person, so I loved it. 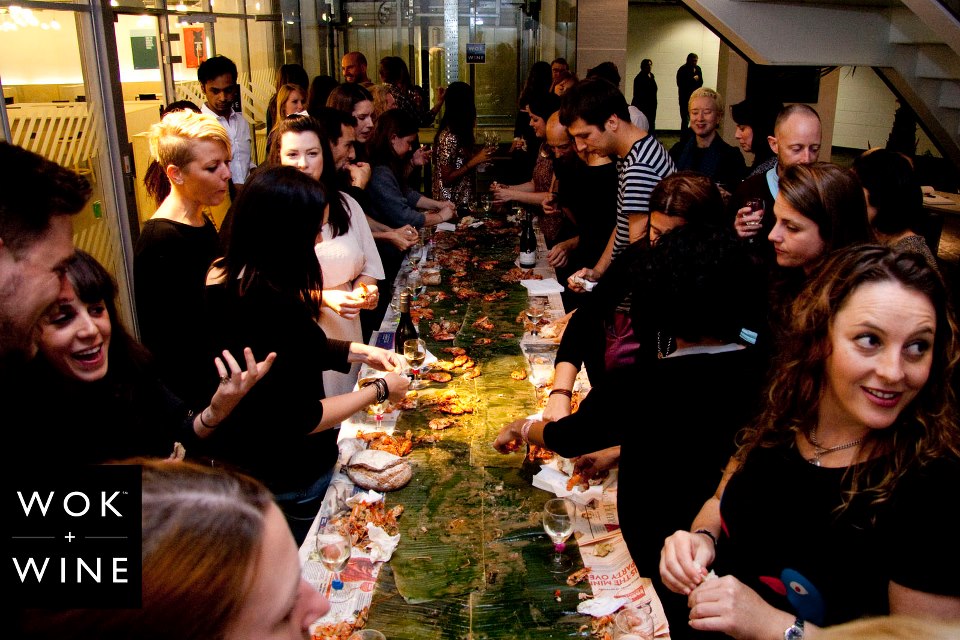 As someone who finds herself shrinking into Awkward Bored Chat Mode at work networking events, and avoiding the obligatory small talk that ensues when drunk randoms make their advances in pubs, it was refreshing to find myself in a situation where wandering up to people and starting a conversation didn’t feel contrived or geared towards getting something out of it, or worse – work.

Anyway, in case you hadn’t guessed, I highly recommend it if you’ve got a spare evening and £35 to spend. The next one is on Friday 19th October, and it’s their 100th event –  you can reserve your spot here, or register to find out about future events here: http://woknwine.com/join.

And if you go and end up with a new work contact, someone to go boozing with, Googling the pub someone suggested you look up the next day or even just a belly full of giant prawns – then mission accomplished: the routine of the same-old-same has been shaken.

If you’ve been, are going, or know a good way to meet interesting Londoners, holllllaaaaaa below.